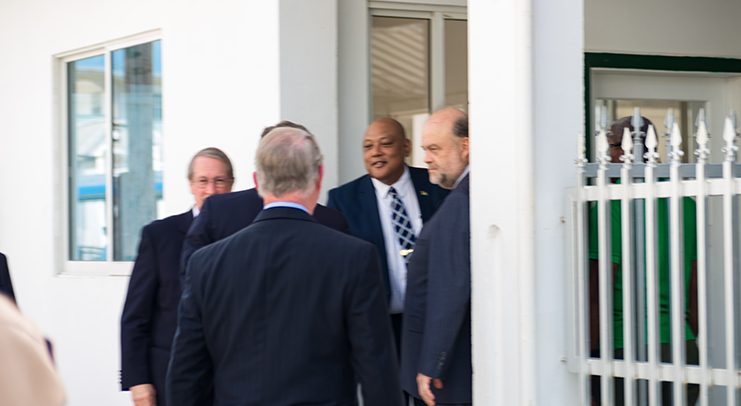 Minister of Foreign Affairs, Carl Greenidge, who is also performing the functions of prime minister and Minister of State Joseph Harmon, are also expected to meet with the U.S. Congressmen, who are being accompanied by senior military personnel in what the Guyanese government had earlier described as a “familarisation tour.”

On Wednesday, Minister Greenidge told the Guyana Chronicle that “they are coming to have discussions of a general political nature.” It is unclear when the U.S. officials arrived in Guyana; however, on Wednesday, U.S. Ambassador Perry Holloway led them into a meeting with Natural Resources Minister Raphael Trotman at the Natural Resources Ministry on Duke Street, Kingston, Georgetown. Earlier that day, the U.S. officials met with alumni from the U.S.- supported exchange programmes for lunch at the Duke Lodge Restaurant.

It was last Thursday that the Minister of State had disclosed that the congressmen and military personnel were expected to visit. According to him, the visit is testimony of growing confidence in Guyana on the international scene, as well as the strengthening of U.S./Guyana relations.

Prime Minister Moses Nagamootoo, in his column ‘My Turn,’ had said that the visit can mean well for Guyana, noting that the visit coincides with the prospects of first-oil by American giant, ExxonMobil. “The huge vested interests have not only attracted high-profile, albeit controversial, coverage from the New York Times, but has also raised an enhanced security profile of Guyana, and presented a new geopolitical and strategic reality in the western hemisphere.

“The Government of the United States of America was quick to connect with this reality on the occasion of the 52nd Independence Anniversary of Guyana. Secretary of State, Mike Pompeo reinforced ‘strong connections’ with Guyana, and committed the United States to the advancement of our prosperity, by helping Guyana to develop her emerging oil sector ‘in partnership with U.S. business’,” Nagamootoo stated.

The prime minister pointed out that this is the single largest congressional delegation ever to visit Guyana. He was quick to note, however, that some of the mistrust afloat can be attributed to several instances in the past, whereby Guyana was disadvantaged by the North American nation. “There have been previous episodic decades that could give justification for this negative nationalism, going back to the late 1950s when the then British colony became a pawn in the Cold War. She was subsequently converted into a laboratory for every conceivable ideological stratagem of American imperialism, which has since been well documented.

“The role of an American company in voter registration for the 1968 elections had spawned a legacy of electoral malpractices, once described by Lord Avesbury, head of a UK Observers’ Mission, as ‘Something to Remember’,” he explained
However, these “episodic decades” gave way to the “wind of change”, Nagamootoo continued, with the involvement of the U.S. in facilitating positive change and investment in a number of areas. “Five American senators petitioned their government to embrace electoral democracy. Ambassador Fleming Jones and former President Jimmy Carter played key roles in promoting bipartisan cooperation ahead of electoral reforms. Not widely known, is the role of then President George Bush Snr in supporting ‘free, fair and credible elections’, which assurance was conveyed to me at the State Department by then Assistant Secretary of State, Sally Cowal,” he recounted.

The prime minister also listed Beal Aerospace Technologies Inc’s agreement with Guyana in 1999, for the installation of a US$50 million rocket launch site in the Waini River area and the granting of an oil exploration concession to ExxonMobil, now proven to be worthwhile.
He also highlighted the support of America in the Guyana-Venezuela border controversy, stating: “With the expected oil bonanza, came renewed but overt diplomatic support for

Guyana’s territorial sovereignty against a spurious claim by Venezuela.
“The U.S. Government declared recognition for the entire ‘Land of Many Waters’ from ‘the Corentyne to the Pakaraimas, from the Takutu to the Amakura…’”
Apart from these, are some 500,000 Guyanese who live and work in the U.S., accounting for US$264.6M in remittances in 2016 and the launch in Guyana of the American Chamber of Commerce (AMCHAM), with start-up members including ExxonMobil and Guyana Telephone & Telegraph Co Limited (GT&T).