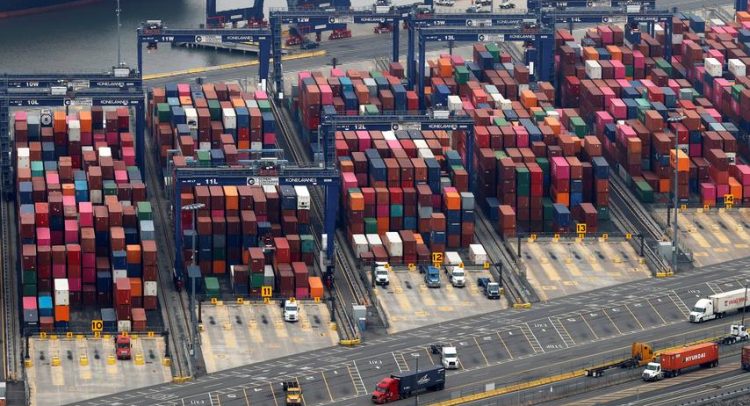 The U.S. current account deficit soared to its highest level in nearly 12 years in the second quarter as the COVID-19 pandemic weighed on the export of goods and services, offsetting a shrinking import bill.

The Commerce Department said on Friday the current account deficit, which measures the flow of goods, services and investments into and out of the country, jumped 52.9% to $170.5 billion last quarter. That was the biggest gap since the third quarter of 2008 when the economy was working its way through the Great Recession.

Data for the first quarter was revised to show a $111.5 billion shortfall, instead of $104.2 billion as previously reported. Economists polled by Reuters had forecast the current account gap increasing to $157.9 billion in the second quarter.

The current account gap represented 3.5% of gross domestic product in the April-June quarter, the biggest share since the fourth quarter of 2008.

The Commerce Department’s Bureau of Economic Analysis, which compiles the data, said the decline in transactions resulted “in part from the impact of COVID-19, as many businesses were operating at limited capacity or ceased operations completely, and the movement of travelers across borders was restricted.”

In the second quarter, exports of goods and services dropped to $444.7 billion, the lowest since the first quarter of 2010, from $605.6 billion in the January-March period. There were sharp declines in the export of petroleum, civilian aircraft and motor vehicles and engines.

Imports of goods and services dropped to $609.6 billion, the lowest level since the third quarter of 2010, from $732.0 billion in the first quarter. The decline mostly reflected decreases in imports of motor vehicles, parts and engines, as well as petroleum.

The amount of money leaving the country also fell last quarter, with declines in interest on loans and deposits. Private sector fines and penalties, as well as government transfers like international aid also declined last quarter.