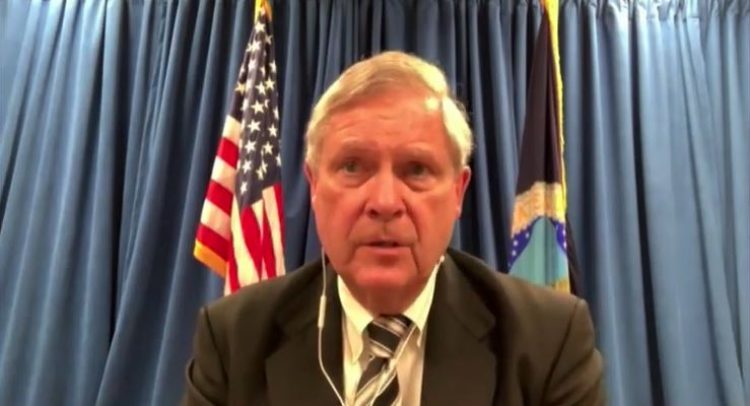 San Jose, 3 September 2021 (IICA) – Agriculture and land use offer some of the best solutions for mitigating climate change, including carbon sequestration by soils, stated U.S. Secretary of Agriculture Tom Vilsack, who addressed his peers in the hemisphere at the Conference of Ministers of Agriculture of the Americas 2021.

During the meeting organized by the Inter-American Institute for Cooperation on Agriculture (IICA) under the theme “Sustainable Agri-food Systems, the Engine of Development of the Americas”, Vilsack explained that, “in order to achieve resilience and global food security, as well as reduce the impact of climate change on people, it is crucial to ensure that the voice of agriculture is heard in forums in which climate action is designed and implemented”.

He added that farmers must also be taken into account when developing “creative solutions to make our sector greener and our communities more resilient and equitable”.

During the virtual meeting, the ministers of the Americas discussed, among other issues, the Hemisphere’s common position ahead of the upcoming UN Food Systems Summit, the emergence of threats to agricultural trade due to the appearance of new pests and diseases, as well as the effects of climate variability on the sector and its strategic nature for economic recovery in the aftermath of Covid-19.

The Secretary noted that the United States is a strong supporter of IICA’s work and highlighted the leadership of Director General Manuel Otero “and his commitment to addressing the collective issues of the Hemisphere”.

“It is crucial that we continue to work together, that we make science-based decisions, and that we jointly promote innovative tools and technologies to build a more sustainable and resilient agricultural production system in the Hemisphere”, explained Vilsack.

“All of us”, he added, “have been heavily impacted by the challenges posed by Covid-19 and have undertaken considerable efforts to maintain a resilient supply chain. I want to acknowledge the hard-working people who, day in and day out, are on the frontline during this time of uncertainty, particularly agricultural producers and farm workers”.

Vilsack noted that transformations in agrifood systems must be tailored to the productive, social and climate characteristics of each country and each region.

“There are many answers”, he noted, “to the multiple challenges we face in agriculture. The EU has one path, and the United States and other countries have a different one. An equally compelling science-based path. There is no one-size-fits-all solution for countries when it comes to guaranteeing sustainable and resilient agricultural practices”.

The official highlighted the joint work recently carried out by the countries of the Americas, based on science and good regulatory practices, on issues such as the development of international standards for animal health, among others.

He also emphasized that, under the leadership of the Director General of IICA, the Member States held three discussions, which enabled the Western Hemisphere to develop a joint position in preparation for the Food Systems Summit, which will take place on September 23 in New York.

“We must ensure that the outcome of this Summit will enable countries to identify pathways toward more sustainable, accessible and equitable food systems that do not create unnecessary barriers to trade”, added Vilsack.

The Secretary also underscored the fact that, following the Food Systems Summit, the United Nations Climate Change Conference of the Parties will be held in Great Britain. He announced that, during the event, the United States will launch an initiative aimed at increasing investments and fostering renewed dialogue between stakeholders involved in finance, agriculture, innovation and other areas, with a view to creating “an agricultural research and development initiative that will catalyze a wave of climate solutions”.

“We’ve witnessed the devastating impacts of climate change”, he said, “which have affected food systems and are likely to become worse. We face multiple challenges: the need to end global hunger, mitigate and adapt to climate change, as well as combat the ongoing pandemic. Together we can do more, and agriculture must and can be part of the solution”.

“I am committed to working together with IICA’s Member States to address these challenges and seize the opportunities available not only in the Western Hemisphere, but around the world”, concluded Vilsack.

No electronic version of vax card until persons are fully vaccinated