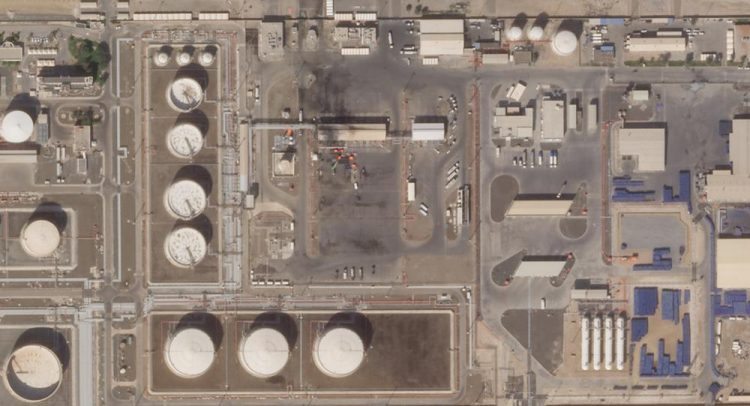 The missile fire further escalates tensions across the Persian Gulf, which previously had seen a series of assaults near — but never indisputably on — Emirati soil. It comes during Yemen’s yearslong war and the collapse of Iran’s nuclear deal with world powers. American troops at Al-Dhafra Air Base in the capital took shelter in bunkers during the attack and fired back with their own Patriot missiles.

The attacks threaten the business-friendly, tourism-focused efforts of the Emirates, a federation of seven sheikhdoms on the Arabian Peninsula also home to Dubai. For years, the country has marketed itself as a safe corner of an otherwise-dangerous neighborhood.

Videos on social media showed the sky over Abu Dhabi light up before dawn Monday, with what appeared to be interceptor missiles racing into the clouds to target the incoming fire. Two explosions later thundered through the city. The videos corresponded to known features of Abu Dhabi.

The Emirates is “ready to deal with any threats and … it takes all necessary measures to protect the state from all attacks,” WAM quoted the UAE Defense Ministry as saying.

A U.S. military official, speaking on condition of anonymity to discuss military operations, acknowledged the assistance of American Patriot missile batteries prevented the Houthi missiles from striking targets in Abu Dhabi. Videos on social media suggested outgoing interceptor fire came from the base.

The missile fire disrupted traffic into Abu Dhabi International Airport, home to the long-haul carrier Etihad, for about an hour after the attack.

Houthi military spokesman Yehia Sarei claimed the attack in a televised statement, saying the rebels targeted several sites in the UAE with both Zulfiqar ballistic missiles and drones, including Al-Dhafra Air Base. He warned the UAE would continue to be a target “as long as attacks on the Yemeni people continue.”

“We warn foreign companies and investors to leave the Emirates!” Sarei shouted from a podium. “This has become an unsafe country!”

The Dubai Financial Market closed down nearly 2% after the attack, with nearly every company trading down. The Abu Dhabi Securities Exchange also fell slightly.

At Al-Dhafra, which hosts both American and British forces, U.S. troops took shelter in bunkers during the attack, the U.S. Air Force’s Mideast command said. Al-Dhafra is home to the 380th Air Expeditionary Wing and has seen armed drones and F-35 stealth fighters stationed there.

The U.S. Embassy in Abu Dhabi later issued a security alert to Americans living in the UAE, warning citizens to “maintain a high level of security awareness.” The alert included instructions on how to cope with missile attacks, something unheard of previously in the UAE, a tourist destination home to skyscraper-studded Dubai and its long-haul carrier Emirates.

“If these types of attacks end up occurring on a weekly basis as they do in the Saudi Arabia … that will shift the perception of the threat landscape in the UAE,” said Torbjorn Soltvedt, an analyst with risk consultancy Verisk Maplecroft. “The concern is now the contagion is going to be broader if we start to see attacks against civilian infrastructure.”

The Emirati Defense Ministry later tweeted out a black-and-white video that it said showed an F-16 striking the ballistic missile launcher used in the Abu Dhabi attack. The Defense Ministry identified the site as being near al-Jawaf, a Yemeni province around 1,400 kilometers (870 miles) southwest of Abu Dhabi.

The state-linked newspaper The National in Abu Dhabi identified the F-16 as Emirati, raising the question of how directly involved the UAE now is in the fighting after withdrawing most of its ground forces in 2019. The Emiratis continue to back militias on the ground, including the Giants Brigade, which has made advances against the Houthis in recent weeks.

The Zulfiqar ballistic missile, believed to have a range of 1,500 kilometers (930 miles), is modeled after the Iranian Qiam missile, according to a report by the International Institute for Strategic Studies. Iran denies directly arming the Houthis, though United Nations experts, Western nations and analysts have linked weapons in the rebels’ arsenal back to Tehran.

“It’s got the classic elements of the coercive strategy,” said Tim Wright, a research analyst at IISS. “In this case, it’s to make them back down on their support” of the Giants Brigade.

The attack came a week after Yemen’s Houthi rebels claimed an attack on the Emirati capital targeting the airport and an Abu Dhabi National Oil Co. fuel depot in the Mussafah neighborhood with drones and cruise missiles. That attack on the fuel depot killed three people and wounded six others.

New, high-resolution satellite photographs obtained by The Associated Press from Planet Labs PBC showed repair work still ongoing at the fuel depot Saturday. Emirati officials have not released images of the attacked sites, nor allowed journalists to see them.

In recent days, a Saudi-led coalition that the UAE backs unleashed punishing airstrikes targeting Yemen, knocking the Arab world’s poorest country off the internet and killing over 80 people at a detention center.

The Houthis had threaten to take revenge against the Emirates and Saudi Arabia over those attacks. On Sunday, the Saudi-led coalition said a Houthi-launched ballistic missile landed in an industrial area in Jizan, Saudi Arabia. The missile tore a deep crater in the ground, television footage showed, and slightly wounded two foreigners of Bangladeshi and Sudanese nationality.

The newspaper in 2017 had faced a two-day publication ban after it ran a headline saying Dubai was the “next target” for the Houthis.

WHO chief warns against talk of ‘endgame’ in pandemic