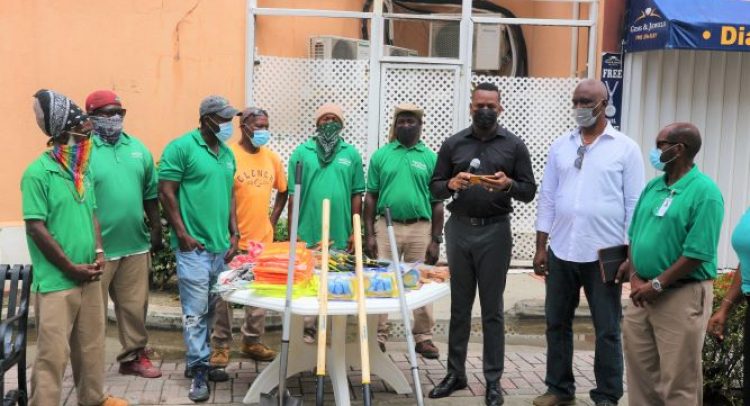 Basseterre, St. Kitts, June 7, 2021 (SKNIS): Minister of Urban Development, Deputy Prime Minister, the Honourable Shawn Richards, in making a donation of equipment on June 4, 2021, to the management and staff of the Urban Development Corporation (UDC), said that the donation will increase capacity.

“The amount that I am donating exceeds 2000 EC dollars and I take this opportunity to announce that for a total of three months including this donation, I will make a similar donation to other UDC departments including that of the security department,” said Deputy Prime Minister Richards.

“Employees are the greatest assets a company can have, even more so when the employees are fully resourced to execute their jobs effectively and efficiently,” he said.

“This not only augments team and company productivity but also boosts employee satisfaction and by extension moral motivation and performance of what’s called organizational citizenship behaviours,” he added.

Deputy Prime Minister Richards said the donation was in response to feedback from the staff at the UDC that they needed essential tools and equipment on the job.

As such, he decided to personally fund the procurement of some of the items needed to better meet the needs of the workers.

Respirators, shovels, personal protective equipment (PPE), saws, cutlasses, shears were some of the tools donated to the UDC.