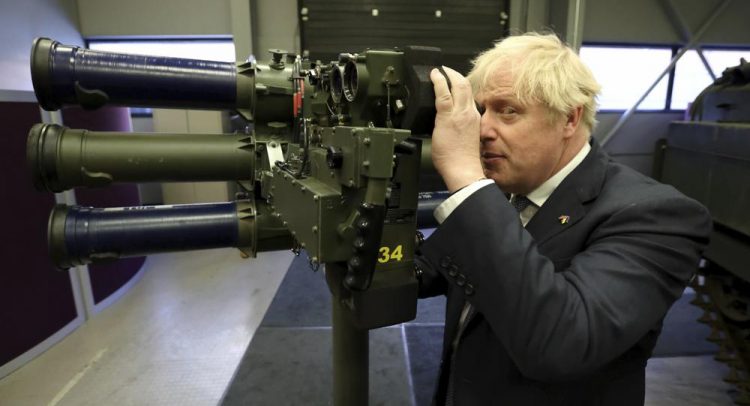 LONDON (AP) — The British government dramatically escalated a fight with the European Union on Tuesday by saying it will pass a law to scrap parts of the trade treaty signed by the two sides less than two years ago.

Britain says its move to singlehandedly change the legally binding treaty — an apparent breach of international law — is an insurance policy in case it can’t reach agreement with the bloc to end a long-running dispute over post-Brexit trade rules.

“Our preference is to reach a negotiated outcome with the EU,” Foreign Secretary Liz Truss said.

The announcement drew a sharp response from the EU, which has long accused Prime Minister Boris Johnson of trying to wriggle out of a deal that his government negotiated and signed as part of the U.K.’s exit in 2020. The spat raises the chances of a trade war between Britain and the 27-nation bloc that is — even after Brexit — its major economic partner.

He said the EU “will need to respond with all measures at its disposal” if the U.K. goes ahead with the bill.

Truss told lawmakers in the House of Commons that the move “is consistent with our obligations in international law.”

She said the bill will be published in the coming weeks, and she hopes to keep up talks with the bloc in the meantime.

Britain’s Conservative government says post-Brexit trade rules are hurting the economy and undermining peace in Northern Ireland, the only part of the U.K. that shares a border with an EU member state.

When Britain left the bloc and its borderless free-trade zone, a deal was agreed to keep the Irish land border free of customs posts and other checks, because an open border is a key pillar of the peace process that ended decades of violence in Northern Ireland.

Instead, to protect the EU’s single market, there are checks on some goods, such as meat and eggs, entering Northern Ireland from the rest of the U.K.

The arrangement is opposed by British unionists in Northern Ireland, who say the new checks have put a burden on businesses and frayed the bonds between Northern Ireland and the rest of the U.K. by creating a customs border in the Irish Sea.

The Democratic Unionist Party, Northern Ireland’s biggest unionist party, is blocking the formation of a power-sharing regional government in Belfast, which should have been formed after the election this month, until the customs checks are scrapped.

Like the DUP, the British government argues that the trade regulations, known as the Northern Ireland Protocol, are destabilizing a peace agreement that relies on support from both Protestant unionist and Catholic nationalist communities.

While the DUP wants the Protocol scrapped, most other parties in Northern Ireland want to keep it, with tweaks to ease the burden on businesses.

Johnson says his government wants to fix the Protocol rather than rip it up. The U.K. says technology and trusted-trader programs could be used to to create a check-free “green lane” for goods destined for Northern Ireland that are at little risk of entering the EU.

The British government hopes its threat of legislation — which would take months to pass through Parliament — will increase pressure on the EU to compromise.

“What that actually involves is getting rid of some relatively minor barriers to trade,” Johnson said Tuesday. “I think there are good, common sense, pragmatic solutions. We need to work with our EU friends to achieve that.”

The bloc insists the treaty can’t be renegotiated, though it is willing to be flexible about how the rules are implemented. The EU could hit back with legal action, and potentially trade sanctions, if Britain doesn’t back down.

Critics of Johnson’s government say a U.K.-EU feud is the last thing Europe needs as it seeks unity in response to Russia’s invasion of Ukraine, and risks damaging the British economy amid a worsening cost-of-living crisis.

Scottish First Minister Nicola Sturgeon, a strong critic of Brexit, said the threat of unilateral action was “reckless and irresponsible.”

“This is a treaty that Boris Johnson signed, and what it says to the rest of the world about the responsibility and the seriousness that the U.K. government attaches to international treaties is profoundly worrying,” Sturgeon told the Associated Press in Washington.

She suggested that Johnson, who won election in 2019 with a vow to “get Brexit done” but has seen his popularity eroded by scandals, was using “the ability to point the finger at the EU to play to his own political base.”

But some Conservatives expressed misgivings.

“Respect for the rule of law … runs deep in our Tory veins,” Conservative legislator Simon Hoare said. “I find it extraordinary that a Tory government needs to be reminded of that.”

Britain’s Prime Minister Boris Johnson with a Mark 3 shoulder launch LML (Lightweight Multiple Launcher) missile system, at Thales weapons manufacturer in Belfast, Monday May 16, 2022, during a visit to Northern Ireland. Johnson said there would be “a necessity to act” if the EU doesn’t agree to overhaul post-Brexit trade rules that he says are destabilizing Northern Ireland’s delicate political balance. Johnson held private talks with the leaders of Northern Ireland’s main political parties, urging them to get back to work. (Liam McBurney/Pool via AP)