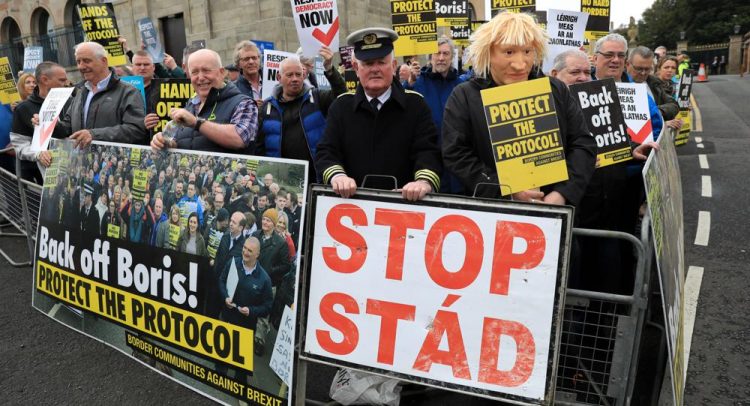 By DANICA KIRKA and SYLVIA HUI

The proposed bill aims to scrap parts of a trade treaty that Prime Minister Boris Johnson signed with the European Union by removing checks on goods entering Northern Ireland from the rest of the U.K.

Britain’s government has said the bill is lawful, but the EU has threatened to retaliate, raising the possibility of a trade war between the two sides.

Coveney tweeted that the U.K. was seeking to “deliberately ratchet up tension with an EU seeking compromise.”

Johnson sought to brush aside criticism, telling reporters that the proposed change is “relatively simple to do.”

“Frankly, it’s a relatively trivial set of adjustments in the grand scheme of things,” he told LBC Radio.

He argued that his government’s “higher and prior legal commitment” is to the 1998 Good Friday peace agreement and to preserve stability in Northern Ireland.

Arrangements for Northern Ireland — the only part of the U.K. that shares a land border with an EU nation — have proved the thorniest issue in Britain’s divorce from the bloc, which became final at the end of 2020.

Britain and the EU agreed as part of their Brexit deal that the Irish land border would be kept free of customs posts and other checks because an open border is a key pillar of the peace process that ended decades of violence in Northern Ireland.

Instead, to protect the EU’s single market, there are checks on some goods, such as meat and eggs, entering Northern Ireland from the rest of the U.K.

But the arrangement has proved politically damaging for Johnson because it treats Northern Ireland differently from the rest of the United Kingdom, potentially weakening the province’s historic links with Britain. Northern Ireland’s Democratic Unionist Party has refused to return to the region’s power-sharing government until the protocol is scrapped or substantially changed to address those concerns.

The bill to override that arrangement is expected to face opposition in Parliament, including from members of Johnson’s Conservatives. Critics say unilaterally changing the protocol would be illegal and would damage Britain’s standing with other countries because its part of a treaty considered binding under international law.

“Breaking international law to rip up the Prime Minister’s own treaty is damaging to everything the U.K. and Conservatives stand for,” opponents of the bill said in a note being circulated among Conservative lawmakers, according to the Financial Times.

FILE – Demonstrators protest outside Hillsborough Castle, ahead of a visit by British Prime Minister Boris Johnson, in Hillsborough, Northern Ireland, Monday, May, 16, 2022. Britain’s government is expected to introduce legislation that would unilaterally change post-Brexit trade rules for Northern Ireland amid opposition from lawmakers who believe the move violates international law. The legislation, expected Monday, June 13, 2022, would let the government bypass the so-called Northern Ireland Protocol, which requires the inspection of some goods shipped there from other parts of the United Kingdom. (AP Photo/Peter Morrison, File)