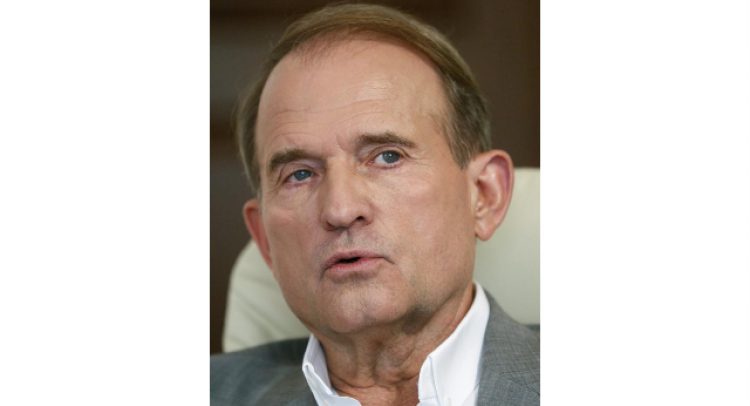 KYIV, Ukraine (AP) — Ukraine has indicted a top opposition figure who is a close ally of Russia’s president with treason and attempts to steal natural resources from Russia-annexed Crimea.

Along with the Tuesday indictment of Viktor Medvedchuk, security service agents also searched his house in the capital Kyiv.

Prosecutor-General Irina Venediktova said that charges under several articles were brought against Medvedchuk business partner Taras Kozak. The charges carry potential sentences of up to 15 years.

Medvedchuk is accused of transferring oil and gas production licenses from one of the fields in Crimea to Russian authorities; Russia annexed Crimea in 2014.

“Medvedchuk, as the organizer of illegal activities, having strong ties with the top leadership of the Russian Federation, began subversive activities against Ukraine, including in the economic sphere,” Venediktova said at a briefing.

The 66-year-old heads the political council of the pro-Russian party Opposition Platform – For Life. It is the largest opposition group in the parliament, with 44 of the 450 seats.

He has close personal ties with Russian President Vladimir Putin, who is the godfather of Medvedchuk’s daughter.

The new charges are part of a broader campaign against Medvedchuk launched by authorities in February, when his financial assets were frozen for three years. In February, authorities also shut down three pro-Russian TV channels, 112, Zik and NewsOne, which Medvedchuk controlled.

His party called the new charges against Medvedchuk “an open and cynical political reprisal.”

FILE-In this photo taken on Friday, July 12, 2019 a party led by one of Russian President Vladimir Putin’s closest associates, tycoon Viktor Medvedchuk, talks during an interview with The Associated Press in Kyiv, Ukraine. Ukraine’s Prosecutor General on Tuesday, May 11, 2021, has charged Medvedchuk with high treason, dealing a blow to Kremlin’s lobby in Ukraine. (AP Photo/Efrem Lukatsky)