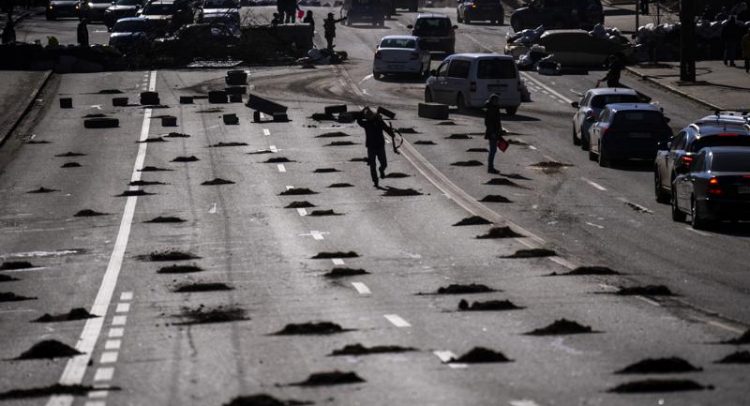 KYIV, Ukraine (AP) — Russian and Ukrainian officials met for talks Monday amid high hopes but low expectations for any diplomatic breakthrough, after Moscow ran into unexpectedly stiff resistance when it unleashed the biggest land war in Europe since World War II.

Stepping up his rhetoric, Putin denounced the U.S. and its allies as an “empire of lies.”

A tense calm reigned in Kyiv, where people lined up to buy food and water after two nights trapped inside by a strict curfew, but social media video from Ukraine’s second-largest city, Kharkiv, showed residential areas being shelled, with apartment buildings shaken by powerful blasts. Authorities in Kharkiv said at least seven people had been killed and dozens injured. They warned that casualties could be far higher.

“They wanted to have a blitzkrieg, but it failed, so they act this way,” said 83-year-old Valentin Petrovich, who described watching the shelling from his downtown apartment. He spoke on condition that his full name not be used, fearing for his security.

The Russian military has denied targeting residential areas despite abundant evidence of shelling of homes, schools and hospitals.

Across the country, terrified families huddled overnight in shelters, basements or corridors.

“I sit and pray for these negotiations to end successfully, so that they reach an agreement to end the slaughter, and so there is no more war,” said Alexandra Mikhailova, weeping as she clutched her cat in a makeshift shelter in the strategic southeastern port city of Mariupol. Around her, parents sought to console children and keep them warm.

The U.N. human rights chief said at least 102 civilians have been killed and hundreds wounded in more than four days of fighting — warning that figure is probably a vast undercount — and Ukraine’s president said at least 16 children were among the dead.

More than a half-million people have fled the country since the invasion, another U.N. official said, with many of them going to Poland, Romania and Hungary. And millions have left their homes.

Still, a sliver of hope emerged as the first face-to-face talks between Ukrainian and Russian officials since the war began opened Monday. The delegations met at a long table with the blue-and-yellow Ukrainian flag on one side and the Russian tricolor on the other.

But while Ukraine sent its defense minister and other top officials, the Russian delegation was led by Putin’s adviser on culture — an unlikely envoy for ending the war and perhaps a sign of how seriously Moscow views the talks.

Meanwhile, Russia’s Central Bank scrambled to shore up the tanking ruble, and the U.S. and European countries upped weapons shipments to Ukraine. While they hope to curb Putin’s aggression, the measures also risked pushing an increasingly cornered Putin closer to the edge — and inflicted pain on ordinary Russians.

In Moscow, people lined up to withdraw cash as the sanctions threatened their livelihoods and savings.

It wasn’t immediately clear what Putin is seeking in the talks, or from the war itself, though Western officials believe he wants to overthrow Ukraine’s government and replace it with a regime of his own, reviving Moscow’s Cold War-era influence.

The Russian leader made a clear link between ever-tightening sanctions and his decision Sunday to raise Russia’s nuclear posture. He also cited “aggressive statements” from NATO.

It was not immediately clear whether the announcement meant any nuclear-armed aircraft were in the air around Ukraine.

U.S. and British officials played down Putin’s nuclear threat as posturing. But for many, the move stirred up memories of the 1962 Cuban Missile Crisis and fears that the West could be drawn into direct conflict with Russia.

In another potential escalation, neighboring Belarus could send troops to help Russia as soon as Monday, according to a senior American intelligence official with direct knowledge of U.S. intelligence assessments. The official was not authorized to discuss the matter publicly and spoke on condition of anonymity.

Western officials say they believe the invasion has been slower, at least so far, than the Kremlin envisioned. British authorities said the bulk of Putin’s forces were about 30 kilometers (20 miles) north of Kyiv.

In other fighting, strategic ports in the country’s south came under assault from Russian forces. Mariupol, on the Sea of Azov, is “hanging on,” said Zelenskyy adviser Oleksiy Arestovich. An oil depot was reported bombed in the eastern city of Sumy. Ukrainian protesters demonstrated against encroaching Russian troops in the port of Berdyansk.

In a war being waged both on the ground and online, cyberattacks hit Ukrainian embassies around the world, and Russian media.

Western nations ramped up the pressure with a freeze on Russia’s hard currency reserves, threatening to bring Russia’s economy to its knees. The U.S., European Union and Britain also agreed to block selected Russian banks from the SWIFT system, which facilitates the moving of money around thousands of banks and other financial institutions worldwide.

In addition to sanctions, the U.S. and Germany announced they will send Stinger missiles and other military supplies to Ukraine. The European Union — founded to ensure peace on the continent after World War II — is supplying lethal aid for the first time, including anti-tank weapons.

At least one Western country is studying a request from Ukraine to provide fighter jets, a European official said. She spoke on condition of anonymity to discuss information not yet public.

EU defense ministers were to meet Monday to discuss how to get the weaponry into Ukraine. A trainload of Czech equipment arrived Sunday and another was en route Monday, though blocking such shipments will clearly be a key Russian priority.

With the Ukrainian capital besieged, the Russian military offered to allow residents to leave Kyiv via a safe corridor. The mayor of the city of nearly 3 million had earlier expressed doubt that civilians could be evacuated.

Isachenkov and Litvinova reported from Moscow. Ellen Knickmeyer, Eric Tucker, Robert Burns and Hope Yen in Washington; James LaPorta in Miami; Francesca Ebel, Josef Federman and Andrew Drake in Kyiv; Mstyslav Chernov and Nic Dumitrache in Mariupol, Ukraine; Lorne Cook in Brussels; and other AP journalists from around the world contributed to this report.

Cars are stopped at a roadblock set by civil defensemen at a road leading to central Kyiv, Ukraine, Monday, Feb. 28, 2022. Explosions and gunfire that have disrupted life since the invasion began last week appeared to subside around Kyiv overnight, as Ukrainian and Russian delegations met Monday on Ukraine’s border with Belarus. It’s unclear what, if anything, those talks would yield. (AP Photo/Emilio Morenatti)