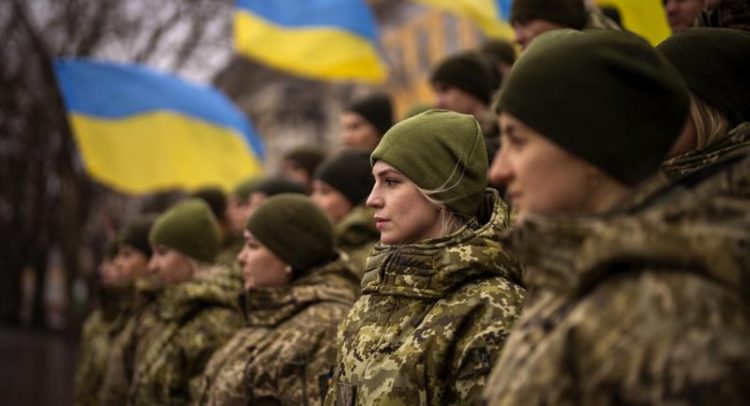 KYIV, Ukraine (AP) — Ukrainians defied pressure from Moscow with a national show of flag-waving unity Wednesday, while the West warned that it saw no sign of a promised pullback of Russian troops from Ukraine’s borders despite Kremlin declarations of a withdrawal.

While a feared Russian invasion of Ukraine on Wednesday did not materialize, the United States and its allies maintain that the threat remains strong, with Europe’s security and economic stability in the balance.

Russian President Vladimir Putin has signaled he wants a peaceful path out of the crisis, and U.S. President Joe Biden promised that the U.S. would continue to give diplomacy “every chance,” but he struck a skeptical tone about Moscow’s intentions. Biden also insisted that Washington and its allies would not “sacrifice basic principles” respecting Ukraine sovereignty.

Russia has massed about 150,000 troops east, north and south of Ukraine. Moscow denies it has any plans to invade and announced a pullback of some forces and weapons, though it gave few details. Even though Putin has not committed to a full withdrawal, the Russian statements also seemed to lower the political temperature following weeks of escalating East-West tensions.

Russian Defense Ministry video showed a trainload of armored vehicles moving across a bridge away from Crimea, the Black Sea peninsula that Russia annexed from Ukraine in 2014. It also announced that more tank units of the Western Military District were being loaded on trains to move back to their permanent bases after training exercises.

NATO Secretary-General Jens Stoltenberg said the alliance also had not seen “any withdrawal of Russian forces.” Before chairing a NATO defense ministers meeting in Brussels, he said: “If they really start to withdraw forces, that’s something we will welcome, but that remains to be seen.”

Ukrainian President Volodymyr Zelenskyy similarly dismissed the Russian withdrawal claims, noting the lack of evidence of a pullback. On a visit to military drills in the Rivne region in western Ukraine, Zelenskyy praised his military, saying: “When I look at you, I’m confident in both today and tomorrow.”

The Ukrainian leader has repeatedly sought to project calm as well as strength during the crisis, declaring Wednesday a “Day of National Unity.”

“We are united by a desire to happily live in peace,” Zelenskyy said in an address to the nation. “We can defend our home only if we stay united.”

Across the country, Ukrainians of all ages waved flags in the streets and from apartment windows.

Hundreds unfolded a 200-meter (650-foot) flag at Kyiv’s Olimpiyskiy Stadium, while another was draped in the center of a shopping mall in the capital.

In the government-controlled part of Ukraine’s eastern region of Luhansk, where Russian-backed separatists have been fighting Ukrainian troops since 2014, residents stretched another huge flag across a street.

“This event, this number of people united around Ukrainian flag will show that we stand for united Ukraine,” said resident Olena Tkachova.

Russian officials countered Western fears of an invasion by alleging that Ukraine may try to reclaim control over the rebel east, even though Kyiv denies any such intention. Russian Foreign Ministry spokeswoman Maria Zakharova said supplies of Western weapons to Ukraine could encourage it to launch a “suicidal aggression.”

Russia wants the West to keep Ukraine and other former Soviet nations out of NATO, halt weapons deployments near Russian borders and roll back forces from Eastern Europe. The U.S. and its allies have roundly rejected those demands, but they offered to engage in talks with Russia on ways to bolster security in Europe.

Speaking after meeting with German Chancellor Olaf Scholz, Putin said Tuesday that the West agreed to discuss a ban on missile deployment to Europe, restrictions on military drills and other confidence-building measures — issues that Moscow put on the table years ago. He added that Russia was willing to discuss those issues, but only in conjunction “with the main issues that are of primary importance for us.”

While Scholz reiterated that NATO’s eastward expansion “is not on the agenda — everyone knows that very well,” Putin retorted that Moscow will not be assuaged by such assurances.

“They are telling us it won’t happen tomorrow,” Putin said. “Well, when will it happen? The day after tomorrow? We want to solve this issue now as part of negotiation process through peaceful means.”

On Wednesday, Russian fighter jets flew training missions over neighboring Belarus and paratroopers held shooting drills at firing ranges there as part of massive war games that the West feared could be used as cover for an invasion of Ukraine. Belarusian Foreign Minister Vladimir Makei reaffirmed that all Russian troops and weapons will leave the country when the maneuvers end Sunday.

Russia has mocked Western warnings about an imminent invasion as “paranoia” and “madness.” Kremlin spokesman Dmitry Peskov pointed sarcastically at warnings of Wednesday’s invasion, saying that Russian officials had a good sleep.

Asked by German daily Welt if Russia was going to attack Wednesday, Russia’s ambassador to the European Union Vladimir Chizhov quipped: “Wars in Europe rarely start on a Wednesday.”

“There won’t be an escalation next week either, on in the week after, or in the coming month,” he said.

But British Defense Secretary Ben Wallace told Sky News that there has been no evidence of a Russian withdrawal. “In fact, we’ve seen continued buildup of things like field hospitals and strategic weapons systems,” he said.

On Tuesday, a series of cyberattacks knocked out the websites of the Ukrainian army, the defense ministry and major banks, and Serhii Demediuk, the No. 2 official at Ukraine’s National Security and Defense Council, blamed Russia.

“The action continued a hybrid aggression of the Russian Federation,” Demediuk told The Associated Press, adding that his group was was working “to stem the attacks and track down their source.”

The Kremlin denied any involvement.

Demediuk said the attacks were intended to sow panic, but Ukrainian authorities moved quickly to restore the websites.

In Moscow, Russian lawmakers sent an appeal to Putin urging him to recognize rebel-held areas in eastern Ukraine as independent states — where Russia has supported rebels in a conflict that has killed over 14,000 in nearly eight years. Putin signaled that he wasn’t inclined to back the motion, which would effectively shatter a 2015 peace deal that was a diplomatic coup for Moscow.

Ukrainian Army soldiers pose for a photo as they gather to celebrate a Day of Unity in Odessa, Ukraine, Wednesday, Feb. 16, 2022. As Western officials warned a Russian invasion could happen as early as today, the Ukrainian President Zelenskyy called for a Day of Unity, with Ukrainians encouraged to raise Ukrainian flags across the country. (AP Photo/Emilio Morenatti)