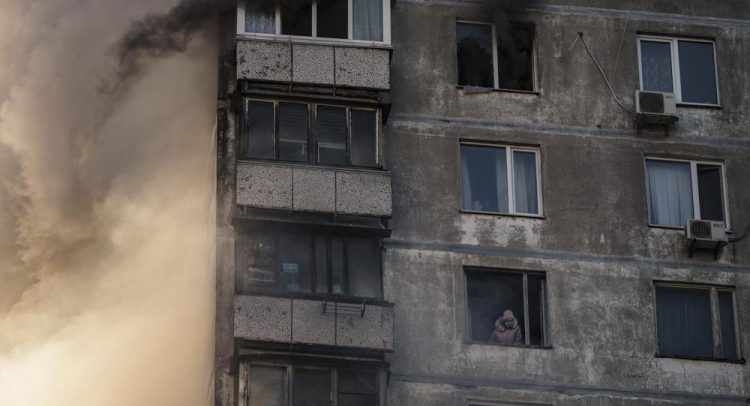 KYIV, Ukraine (AP) — Russia’s relentless bombardment of Ukraine edged closer to central Kyiv as a series of strikes hit a residential neighborhood Tuesday, while the leaders of three European Union countries planned a bold visit to Ukraine’s capital and the number of people the war has driven from the country passed 3 million.

The strikes targeted a western district of Kyiv, disrupting a relative calm that returned after an initial advance by Russian forces was stopped in the early days of the war. Tuesday’s shelling ignited a huge fire in a 15-story apartment building and spurred a frantic rescue effort.

Kyiv mayor Vitali Klitschko announced a new curfew for the city, saying it would run for 35 hours from 8 p.m. Tuesday until 7 a.m. Thursday

As Russia stepped up its assault on Kyiv, the leaders of Poland, the Czech Republic and Slovenia set out for Ukraine’s embattled capital by train to show support for the country.

“The aim of the visit is to express the European Union’s unequivocal support for Ukraine and its freedom and independence,” Czech Prime Minister Petr Fiala said in a tweet. He was joined by Janez Jansa of Slovenia, Mateusz Morawiecki of Poland and Jaroslaw Kaczynski, Poland’s de-facto leader.

EU officials characterized the visit as one the central European leaders had undertaken independently despite security risks. The 27-nation bloc’s other leaders were “informed” of the trip but did not sanction it, EU officials said.

The International Organization for Migration said the number of people who have fled Ukraine since Russia invaded on Feb. 24 passed 3 million on Tuesday. The U.N. has described the flood of people crossing into Poland and other neighboring countries as Europe’s biggest refugee crisis since World War II.

Russian and Ukrainian negotiators held a second day of talks as Russia’s invasion of Ukraine reached its 20th day. The Red Cross and the United Nations refugee agency say millions of people face food and medicine shortages along with the immediate conflict threats of shelling and air attacks.

The Ukrainian government said new aid and evacuation efforts would take place Tuesday along nine corridors around the country, including the Kyiv region. But past attempts have repeatedly failed amid continued fighting.

One of the most desperate situations is in Mariupol, an encircled port city of 430,000 where local officials estimate a lethal siege has killed more than 2,300 people and left residents desperate for food, water, heat and medicine.

The Mariupol city council reported Tuesday that civilian evacuations were underway. The council said 2,000 civilian cars had managed to leave along a humanitarian corridor that runs for more than 260 kilometers (160 miles) west to the city of Zaporizhzhia.

The city council said another 2,000 cars were waiting to leave along the evacuation route. It was not immediately clear if the number of departed vehicles given Tuesday included 160 cars that left the day before.

Russia’s invasion has shocked the world, upended Europe’s post-Cold War security order and driven millions from their homes. Russia’s military is bigger and better equipped than Ukraine’s, but its troops have faced stiffer-than-expected resistance, bolstered by arms supplied by the West.

When Russia launched the war three weeks ago, fear of an imminent invasion gripped the Ukrainian capital, and residents slept in subway stations or crammed onto trains to flee. But as the Russian offensive bogged down, Kyiv saw a relative lull. U.S. officials say Russian forces were about 15 kilometers (9 miles) from the center of the city as of Monday.

Fighting has intensified on Kyiv’s outskirts in recent days, and sporadic air raid sirens ring out around the capital.

The early morning artillery strikes hit the Svyatoshynskyi district of western Kyiv, adjacent to the suburb of Irpin, which has seen some of the worst battles of the war.

Flames shot out of the 15-story apartment building and smoke choked the air as firefighters climbed ladders to rescue people. The assault blackened several floors of the building, ripped a hole in the ground outside and blew out windows in neighboring apartment blocks.

Rescue workers said one person died and several were rescued but others remained inside.

“Yesterday we extinguished one fire, today another, it is very difficult,” said one young firefighter as he took a brief break outside the building, tears falling from his eyes.

“People are dying, and the worst thing is that children are dying. They haven’t lived their lives and they have already seen this, this is the worst,” said the rescuer, who gave only his first name, Andriy.

Shockwaves from an explosion also damaged the entry to a downtown subway station that has been used as a bomb shelter. City authorities tweeted an image of the blown-out facade, saying trains would no longer stop at the station.

A 10-story apartment building in the Podilsky district of Kyiv, north of the government quarter, was damaged by unspecified ammunition. Russian forces also stepped up strikes overnight on Irpin and the northwest Kyiv suburbs of Hostomel and Bucha, said the head of the capital region, Oleksiy Kuleba.

“Many streets (in those areas) have been turned into a mush of steel and concrete. People have been hiding for weeks in basements, and are afraid to go out even for evacuations,” Kuleba said on Ukrainian television.

Sinehubov said fires were raging and rescuers had pulled “dozens of bodies of civilian residents,” from the ruins of destroyed apartment buildings.

Zelenskyy is seeking to extend martial law until April 24 and to require men ages 18 to 60 to stay in the country to fight. Ukraine’s parliament is expected to vote on the measure this week.

The Ukrainian leader appealed for more weapons to counter Russia’s military. He said Ukraine’s forces are rapidly using up weapons and other hardware supplied by Western nations, and he asked northern European leaders to “help yourself by helping us.”

As Russia struggled to gain ground in Ukraine, U.S. administration officials alleged that Moscow had asked China for help, and Beijing had signaled that it would be willing to provide both military support and financial backing to help stave off effects of Western sanctions.

Russia and China denied military assistance had been asked for or granted.

Talks between Russian and Ukrainian negotiators resumed Tuesday, after failing to make a breakthrough — or to break down — on Monday. The two sides had expressed some optimism about the negotiations, which Ukrainian presidential aide Mykhailo Podolyak said were discussing “ceasefire” and “withdrawal of troops from the territory of the country.”

With each day, the human cost of the grinding war continues to rise. The Ukrainian general prosecutor’s office released details of two deadly Russian attacks that took place Monday: an artillery strike that hit a university and open-air market in the northern city of Chernihiv, killing 10, and the shooting of a 65-year-old woman on a bus that was evacuating civilians from a Kyiv suburb.

The number of people killed in a Russian rocket attack on a TV tower in western Ukraine on Monday rose to 19, authorities in the Rivne region said Tuesday. A further nine people were injured in the strike on the TV tower in Antopol, a village about 160 kilometers (100 miles) from the border of NATO member Poland.

In Mykolaiv, a strategic southern city near the Black Sea where airstrikes killed nine people Sunday, residents braced for more attacks. Volunteers prepared food and sorted donated clothes at an abandoned naval yard that was turned into a support center for troops. Molotov cocktails were already on hand to take on invaders.

Svetlana Gryshchenko, whose soldier son was killed in the fighting, said it was “impossible to put into words” what was happening to the city.

“We are bombed during the day and during the night …. It’s a nightmare what Russia is doing on the territory of Ukraine,” she said.

An elderly resident waits to be rescued by firefighters after the apartment building was hit by shelling in Kyiv, Ukraine, Tuesday, March 15, 2022. (AP Photo/Felipe Dana)

Associated Press writers Raf Casert in Brussels, Lolita C. Baldor in Washington and AP journalists from around the world contributed to this report.