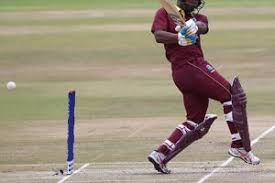 Noted Caribbean umpires Gregory Brathwaite and Joel Wilson have been named to stand in the Super Sixes stage of the ongoing ICC World Cup qualifiers here.

The pair will take charge of Thursday’s contest between United Arab Emirates (UAE) and Scotland at Queens Sports Club, one of four matches scheduled on the opening day of the second round.

Wilson will also stand in Sunday’s fixture between Ireland and Scotland at Harare Sports Club, with Brathwaite acting as third umpire.

Brathwaite will be one of the on-field officials when UAE take on Afghanistan at Old Hararians, and will also stand in UAE’s clash with Zimbabwe on March 22 at Harare Sports Club, with Wilson serving as third umpire.

Wilson will then stand in the following day’s fixture between Ireland and Afghanistan, also at Harare Sports Club.

The 51-year-old, who has already stood in 10 Tests and 49 One-Day Internationals, will be reserve umpire for the UAE/Afghanistan fixture.

Brathwaite, 48, who has stood in 26 ODIs but is yet to make his debut in Tests, will serve as fourth umpire for the Ireland/Afghanistan clash.