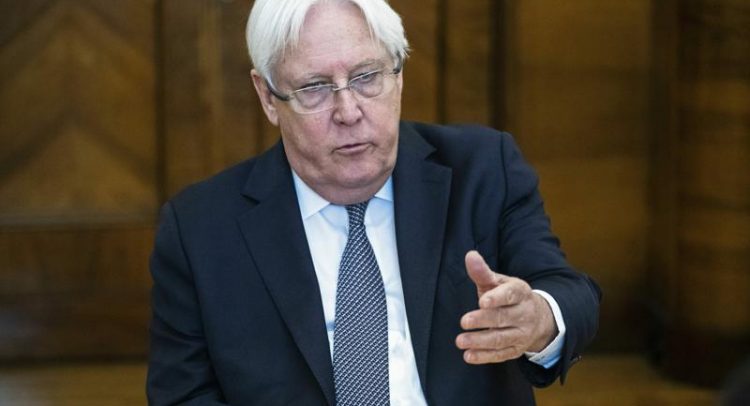 UNITED NATIONS (AP) — The outgoing special envoy for Yemen expressed “deep regret” to the U.N. Security Council on Tuesday that he failed to mediate a cease-fire and peace talks between Yemen’s warring parties during the last three years.

But Martin Griffiths said he hoped that diplomatic efforts, especially by Oman, “will bear fruit” despite painting a bleak picture of the Arab world’s poorest country in his final briefing to the council.

Griffiths said Yemen is in the throes of the world’s worst humanitarian crisis and people are forced to “live under violence, insecurity and fear, with limits to their freedom of movement, religion and free expression.”

“Yemen is a tale of missed and then lost opportunities,” he said. “And perhaps most tragically, we have seen the hopes and aspirations of a generation of young Yemenis for a peaceful future dashed.”

Yemen has been embroiled in a civil war since 2014, when Iran-backed Houthi rebels swept across much of the north and seized the capital, Sanaa, forcing the internationally recognized government into exile. A Saudi-led coalition entered the conflict the following year on the side of the government to try to restore it to power. But more than six years later, the war has killed over 130,000 people and fighting continues.

Griffiths, who will soon be starting his new job as the U.N.‘s humanitarian chief, made clear that what has been missing in his mediation efforts is the courage and willingness of the warring parties’ leaders to choose a path toward peace rather than continuation of the conflict.

During his recent visit to Sanaa, Griffiths said, the Houthis’ religious and military leader, Abdel-Malek al-Houthi, said there must first be an agreement on reopening Sanaa Airport and key Hodeida ports and only after that is implemented would the Houthis begin negotiations on a cease-fire, a first step toward reviving peace negotiations.

The government, he said, insists that an agreement on the ports and airport and the start of a cease-fire be implemented as a package.

“With the focus on getting that cease-fire started, we have offered different solutions to bridge these positions,” Griffiths said. “Unfortunately, as of now, none of these suggestions have been accepted.”

“I hope very, very much indeed — I’m sure we all do — that the efforts undertaken by the Sultanate of Oman as well as others, but the Sultanate of Oman in particular, following my own visits to Sanaa and Riyadh will bear fruit and that we will soon hear a different turn of fate for Yemen,” he said.

Griffiths said “time is not on Yemen’s side,” pointing to the multiplication and fragmentation of “armed and political actors” since the conflict began.

Griffiths raised the possibility of holding “an international conversation” to restate realistic goals for peace negotiations. But he said his worry is not so much about a cease-fire as it is the future of Yemen.

“Yemen needs a pluralistic political future, and the U.N.-facilitated political process must pave the way for them to achieve just that,” he said.

FILE – In this July 1, 2019 file photo, United Nations Special Envoy to Yemen Martin Griffiths speaks during his meeting with Russian Foreign Minister Sergey Lavrov in Moscow, Russia. The outgoing special envoy for Yemen expressed “deep regret” to the U.N. Security Council on Tuesday, June 15, 2021, that he failed to mediate a cease-fire and peace talks between Yemen’s warring parties during the past three years. But Griffiths said he hoped that diplomatic efforts, especially by Oman, “will bear fruit” despite painting a bleak picture of the Arab world’s poorest country in his final briefing to the council. (AP Photo/Pavel Golovkin, File)