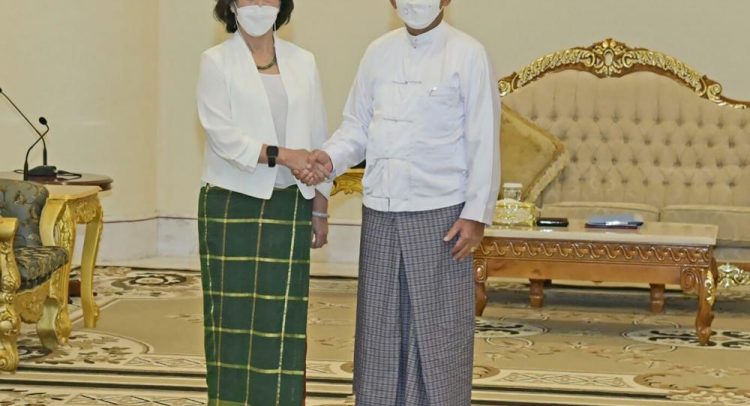 BANGKOK (AP) — The U.N. special envoy for Myanmar, Noeleen Heyzer, met Wednesday with the head of its military-installed government and called for a halt to all violence on her first mission to the strife-torn country, her office said.

In her talks with Senior Gen. Min Aung Hlaing, Heyzer amplified a recent call by the U.N. Security Council for full respect for human rights and the rule of law, the immediate cessation of all violence, and unfettered humanitarian access to all those in need, her office said in a statement.

State-run MRTV television confirmed the meeting, saying Heyzer and Min Aung Hlaing exchanged views on promoting trust and cooperation between Myanmar and the United Nations. It did not provide any details on the talks in Myanmar’s capital, Naypyitaw.

Myanmar has been wracked by violent unrest since the army ousted the elected government of Aung San Suu Kyi in February last year. The army’s takeover prevented Suu Kyi’s National League for Democracy party from beginning a second term in office.

The takeover was met with massive public opposition, which has since turned into armed resistance that some U.N. experts, including Heyzer’s predecessor, Christine Schraner Burgener, have characterized as civil war. Critics of the military have accused it of carrying out widespread human rights abuses to crush opposition to its rule.

The statement from Heyzer’s office said she called for “immediate and specific de-escalation steps including ending aerial bombing and the burning of civilian houses and infrastructure.”

MRTV reported that Heyzer held a separate meeting with Foreign Minister Wunna Maung Lwin and said he explained current developments in Myanmar and told Heyzer that it was necessary for the United Nations to review its approach in its cooperation with Myanmar. It did not elaborate.

Heyzer’s visit follows the military government’s recent execution of four political activists, which drew worldwide condemnation. The statement from her office said she “directly urged the Senior General to impose a moratorium on all future executions (and) reiterated the United Nations Secretary-General’s call for the release of all political prisoners.”

It said she also conveyed an Australian government request for the release of Australian economist Sean Turnell, who served as an adviser to Suu Kyi and is being tried with her on a charge of violating Myanmar’s Official Secrets Act.

Much of the international community, including Myanmar’s fellow members in the Association of Southeast Asian Nations, have expressed frustration at the hard line the generals have taken in resisting reform. Myanmar’s military rulers agreed to a five-point ASEAN plan in April 2021 to restore peace and stability to the country, including an immediate halt to violence and a dialogue among all parties. But the military has made little effort to implement the plan.

It was unknown if Heyzer will meet with Suu Kyi, who is being held in prison in Naypyitaw. She has been prosecuted in a string of criminal cases widely seen as politically motivated by the ruling military. The government has refused to allow her to meet with any outsiders, including a special envoy from ASEAN.

Heyzer requested a meeting with Suu Kyi, the statement from her office said.

“I’m deeply concerned about Daw Aung San Suu Kyi’s health and wellbeing in her current situation, and request that she can return home soon,” it quoted her saying. “I want to have an opportunity to meet with her as soon as possible, both because I care about her personally and I believe she is a critical stakeholder for my dialogue with all parties concerned.”

The National Unity Government, the main opposition organization which views itself as a legitimate government of Myanmar, issued a statement after Heyzer arrived Tuesday, saying her visit must be aimed at ending the military’s violence and her talks must reflect the voice of the Myanmar people.

“The special envoy’s visit must be directed at ending the junta’s violence, its weaponization of aid, its persecution of political prisoners, and its impunity. Intensified efforts must also target the multiple junta-induced crises destabilizing the region’s peace and security. Anything short of this would be an appeasement of war criminals,” it said. “Mrs. Heyzer’s consultations must include Myanmar’s ethnic resistance organizations and civil society, and amplify the voices of Myanmar people.”

UK man in court over threat to ‘kill queen’ with crossbow