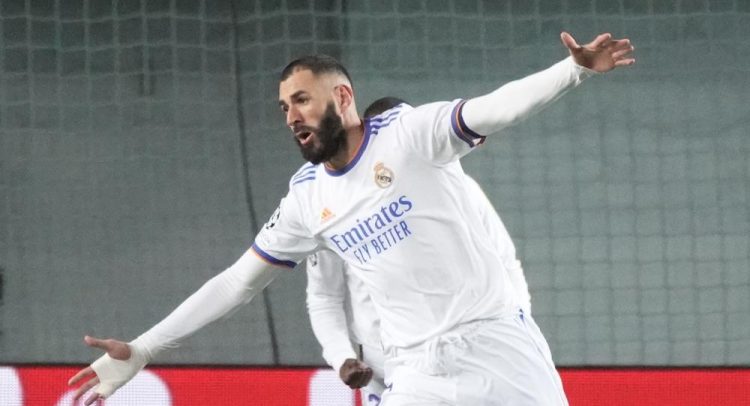 BARCELONA, Spain (AP) — Karim Benzema and the teams that employ him appear unfazed by his guilty verdict for having played a part in the sex tape blackmail plot against a former France teammate.

Hours after the conviction by a Versailles court on Wednesday, Benzema helped Real Madrid clinch a spot in the Champions League knockout phase for a 25th consecutive season by scoring in a 3-0 win at Sheriff in Moldavia.

Benzema should be back in action again on Sunday, when Madrid hosts Sevilla in a clash of two of the hottest teams in the Spanish league.

Benzema, who denied any wrongdoing, was found guilty of being involved in an attempt to blackmail Mathieu Valbuena in 2015 over a sex tape thought to have been stolen from Valbuena’s mobile phone. But Benzema’s one-year sentence was suspended, meaning he won’t do prison time.

His reputation has undoubtedly been tarnished by the guilty verdict, but his playing career for club and country appears to be unaffected — for the time being.

Benzema did not speak following Madrid’s win in Tiraspol, and coach Carlo Ancelotti said even he had not brought up the case with his striker.

“We haven’t spoken, but he’s relaxed,” Ancelotti said. “It’s something that was spoken about some time ago. The player is totally focused on his job. He seems calm and he played really well today.”

At age 33, Benzema is essential to Madrid.

Once criticized in the Spanish capital for not making the most of his talent, he has emerged from Cristiano Ronaldo’s shadow to become one of Europe’s most reliable scorers. His goal against Sheriff was his 15th for Madrid this season, including a Spanish league-leading 12. That comes after he found the net 30 times last season.

France coach Didier Deschamps took notice in May when he recalled Benzema in time for the European Championship after having ostracized him for nearly six years because of the sex tape case. In explaining the recall, Deschamps said, “I don’t have the capacity and no one does, not even Karim, of going back and changing the past. The most important thing is today and the future.”

The head of the French Football Federation said after the verdict that Benzema will remain eligible for the national team.

“As far as the federation is concerned, there is no change,” federation president Noel Le Graet told L’Équipe. “This sanction does not change anything for me. He can be selected. He has the right to work. You can make a mistake, get a suspended sentence and go back to work.”

Benzema has not disappointed since returning to France’s team. He scored four goals in four matches at the Euros. He helped France win the Nations League last month, scoring in both the semifinal against Belgium and the final against Spain, and seal its place in next year’s World Cup.

Benzema will be among the favorites to win the Ballon d’Or on Nov. 29 in Paris. The night before the gala, Benzema will lead Madrid against Sevilla.

Madrid leads the league, with Sevilla only two points back in third place.

Sevilla kept alive its chances of joining Madrid in the Champions League round of 16 when it beat Wolfsburg 2-0 on Tuesday.

Sevilla has boosted its attack this season. Newcomers Rafa Mir and Erik Lamela have combined for nine goals to lead the deep squad coached by former Madrid manager Julen Lopetegui.

Madrid defender David Alaba is doubtful for the match after being substituted against Sheriff following his opening goal because of a knee problem.

Second-placed Real Sociedad will be hoping for Madrid to stumble as it visits Espanyol on Sunday trailing Madrid by just one point.

Like Sevilla, Barcelona, Atlético Madrid and Villarreal are also in danger of not advancing past the Champions League group stage with only one game remaining.

Atlético is facing a possible early exit after losing at home to AC Milan 1-0. Diego Simeone’s team will look to rebound at Cádiz on Sunday. The defending league champions are in fourth place, four points back.

Xavi Hernández will coach his third game for Barcelona when it visits Villarreal on Sunday. His debut was a 1-0 win over Espanyol last weekend followed by a 0-0 draw with Benfica at Camp Nou midweek.

Real Madrid’s Karim Benzema celebrates after scoring his side’s third goal during the Champions League, group D soccer match between Sheriff Tiraspol and Real Madrid in Tiraspol, the capital of the breakaway region of Transnistria, a disputed territory unrecognized by the international community, in Moldova, Wednesday, Nov. 24, 2021. (AP Photo/Sergei Grits)

Brazil launches the Living Soils of the Americas program, the restoration initiative promoted by IICA and renowned scientist Rattan Lal