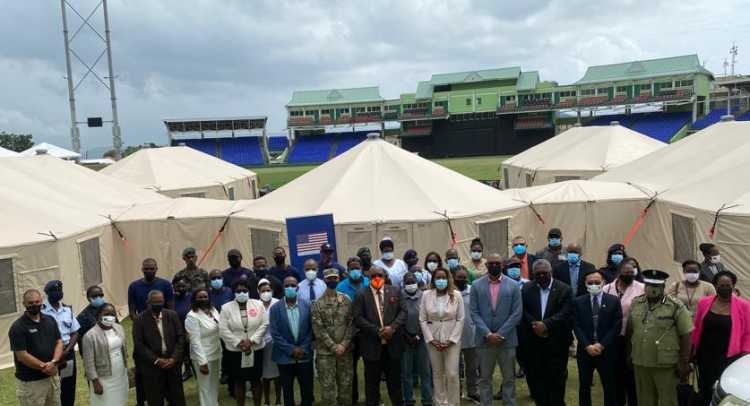 The United States donated two 40-bed field hospitals, one to each island of the Federation of St. Kitts and Nevis, during a handover ceremony on October 13.  U.S. Ambassador to St. Kitts and Nevis Linda Taglialatela joined Prime Minister Timothy Harris virtually for the handover.  A tour of one of the hospitals with members of the Ministry of Health and other government officials followed.

“We know that the medical beds of these two field hospitals will help you continue your model management of COVID-19,” said Ambassador Taglialatela.  “They will support you to deploy first responders and medical personnel quickly to where they are needed.  The United States will continue to stand with you to ensure our shared health and prosperity.”

Prime Minister Harris thanked the United States for the donation.  “We have seen that the United States of America, the government there has emerged as a significant partner to us in the fight against the pandemic,” the Prime Minister said. “I am delighted to participate in the historic handing over of this field hospital, an important first in the Federation of St. Kitts and Nevis. And I’m equally delighted another hospital will too be commissioned on the island of Nevis.”

In addition to the two field hospitals, the U.S. donation also included two vans and technology equipment for the National Emergency Management Agency (NEMA) and a van and forklift for the Nevis Disaster Management Department (NDMD).  The donations, valued over US$1.3 million, will help respond to the current surge in COVID-19 cases and support the National Emergency Operations Center in Basseterre to prepare for future challenges.

The donation was made possible through the U.S. military’s U.S. Southern Command Humanitarian Assistance Program.  It included a four-day training on the setup, teardown, and storage of the field hospitals with the U.S. manufacturer, Western Shelter.  More than 30 members of fire, police, military, and administrative health services participated in the exercise with NEMA and NDMD.  The training crews are deconstructing the temporary setup Wednesday and Thursday at Warner Park as government and hospital officials survey site options in both St. Kitts and Nevis for the field hospitals’ deployment.

Featured Image – U.S. Embassy officials and representatives of the St. Kitts and Nevis government gather in front of the Field Hospital temporarily constructed at the Warner Park Sporting Complex.