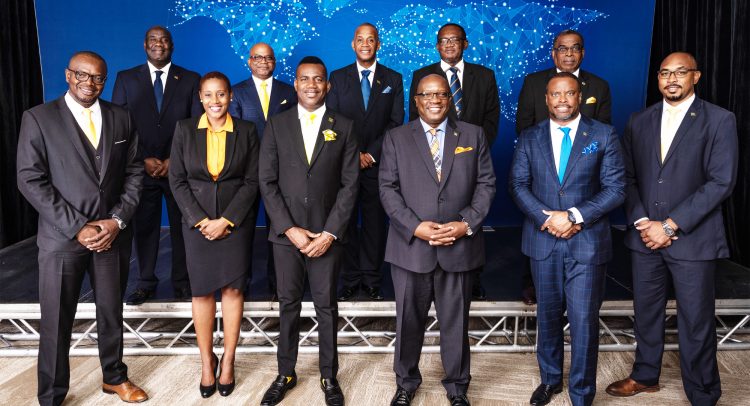 In what has now become the new normal due to the global coronavirus pandemic, on Tuesday May 19 thousands of citizens at home and overseas and residents, and friends of St. Kitts and Nevis around the world virtually participated in the 869 Forward Team Unity Virtual Campaign Launch held at the St. Kitts Marriot Resort.

Team Unity is made up of three political parties and the launch of Team Unity’s Stronger, Safer Future Virtual Election Campaign enabled the general public to see who is who in the eleven member Dream Team that will seek to retain the reins of government with an added majority come the June 5 General Election.

The Dream Team brings renewed hope as it is made up of Kittitians and Nevisians who have a wealth of experience that will take the Federation to a new level. Eleven seats, eight on St. Kitts and three on Nevis, are up for grabs.

Team Unity held seven seats in the last parliament. Based on its five-year superlative record in government that has transformed the federation, making it the best example of a well-managed small island state, additional seats are expect to come Team Unity’s way.

Youth and Sports Ambassador, Mr Jonel Powell (PAM) eying St. Christopher Two and Nevis’ Deputy Premier the Hon Alexis Jeffers (CCM) who is eying Nevis 11 would have offered themselves for the 2015 Federal Elections and are expected to take those seats this time around.

Three on the Dream Team are new to the Federal Elections but they come with the prerequisite experience that the Federation needs. They are the Hon Akilah Byron-Nisbett (PLP) for St. Christopher Three, who was the Deputy Speaker in the recently dissolved National Assembly, and Civil Engineer Mr Kevin ‘Ninky’ Williams (PLP) for St. Christopher Six, who is the chairman of PLP’s Constituency Number Six Executive Branch.

The third is the Hon Eric Evelyn (CCM) who will be replacing the Hon Vance Amory in Nevis Ten. Representing Gingerland in the Nevis Island Assembly, he is the Minister of Culture, Youth, Sports, Community Development, and Telecommunications and Information. A former Permanent Secretary in the Ministry of Agriculture in the Nevis Island Administration, Hon Evelyn is well-known for his past exploits as a prolific newscaster on the Voice of Nevis (VON) Radio.

Putting God first has been Team Unity’s hallmark, and it could not execute a single event including in the National Assembly before God’s blessings were invoked. The launch of Stronger, Safer Future Virtual Election Campaign saw Pastor Lincoln Hazell of the Apostolic Faith Mission Church in Basseterre invoking God’s blessings.

Pastor Hazell is on record as having said on Sunday March 25, 2018: “I always tell the church, learn from Team Unity. If we work together we can get a lot of things done. You see, the politicians are uniting.”

Having served the country in the last five years and clearly steering affairs of state to everyone’s satisfaction, the Dream Team is appealing to citizens and residents of the Federation who are eligible to vote to give Team Unity another five years, with more seats, for it to continue the good work that has benefitted all irrespective of their political persuasion.