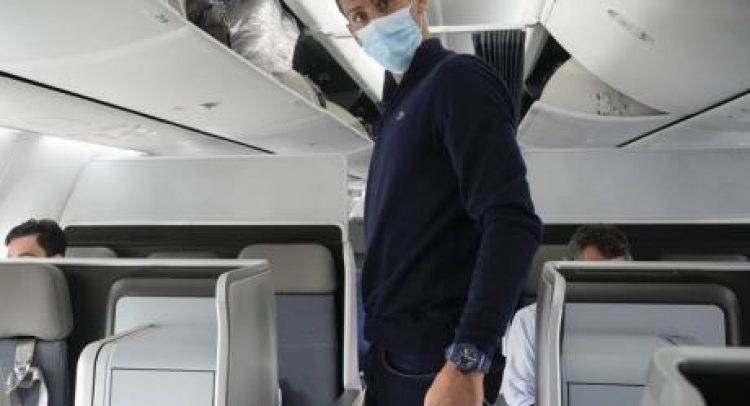 LONDON (AP) — If forced to choose, Novak Djokovic said he would skip the French Open and Wimbledon, foregoing the chance to overtake Rafael Nadal’s record haul of 21 Grand Slams titles, rather than get vaccinated against COVID-19.

And the No. 1-ranked tennis player is also still smarting about being deported last month from Australia in a drama about his vaccination status that polarised opinion worldwide.

Speaking in an interview broadcast Tuesday by the BBC, the 20-time Grand Slam champion said he is still not vaccinated, and prepared to sacrifice titles to stay that way.

If need be, not defending his titles at Roland Garros and Wimbledon and missing other tournaments is “the price that I am willing to pay,” said the 34-year-old Serb, comments likely to further boost his hero-status among some opponents of vaccination.

Djokovic said he is not opposed to vaccinations and sought to distance himself from anti-vaccination campaigners, saying: “I have never said that I am part of that movement.”

But he said “everyone has the right to choose, to act, or say what ever they feel is appropriate for them” and that he believes in “the freedom to choose what you put into your body. And, for me, that is essential.”

“I am trying to be in tune with my body as much as I possibly can,” he said, adding that he has always been careful about everything he ingests. “Based on all the information that I got, I decided not to take the vaccine, as of today.

“I understand the consequences of my decision,” Djokovic said. “I understand that not being vaccinated today, you know, I am unable to travel to most of the tournaments at the moment.”

Asked if he would be prepared to miss the French Open in May, he repeated: “That is the price that I am willing to pay.”

Also asked if would be ready to skip Wimbledon, he added: “Yes.”

“Because the principles of decision-making on my body are more important than any title or anything else,” he said.

Djokovic has won the French Open twice, including in 2021, and has six Wimbledon titles, including the last three.

Nadal won this year’s Australian Open, giving him one more major title than Djokovic and Roger Federer. Djokovic was deported before he could play.

Djokovic went back over the deportation drama in detail with the BBC and made clear his displeasure at how it turned out.

Novak Djokovic prepares to take his seat on a plane to Belgrade, in Dubai, United Arab Emirates, Monday, January 17, 2022. Djokovic was deported from Australia after losing a bid to stay in the country to defend his Australian Open title despite not being vaccinated against COVID-19. Prime Minister Scott Morrison said on Monday, February 7, 2022, that the border would reopen to all vaccinated visas holders from February 21. (AP Photo/Darko Bandic, FILE)

Rihanna opens up about pregnancy side-effects