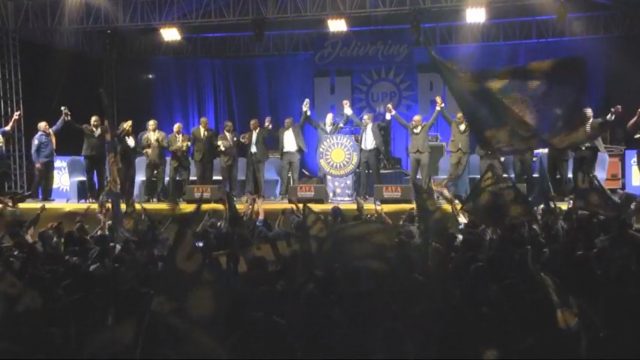 he main opposition United Progressive Party (UPP) has officially launched its campaign for the March 21 general election with party leader Harold Lovell, confident that it will reverse the 2014 defeat it suffered at the hands of the ruling Antigua and Barbuda Labour Party (ABLP).

Lovell, who is leading the party into a general election for the first time, sad that the “war is on” and that the message of the campaign is “delivering hope, happiness, opportunity, prosperity and empowerment.”

He said the UPP had adopted the theme “because of the hopelessness that has spread across this nation over the past three years or so.

Prime Minister Gaston Browne last week announced the election date more than a year after his party won a 14-3 victory in the 2014 polls, saying that he had decided on an early poll because of the significant number of projects estimated at more than EC$1.5 billion (One EC dollar-US$0.37 cents) to come on stream over the next few months.

But Lovell said that the many promises the ruling ABLP has made since coming to office has come to nothing, noting that “after the first 365 days had passed, instead of seeing 365 houses built, not one of the 500 Homes had been completed.  Up to now, nearly 1,400 days later, not even 14 of them are occupied”.

He said various tradesmen had also been “fooled” by the promises made by the prime minister and that hopelessness was not only confined the job market.

He said the environment, education, agriculture sectors have all suffered at the hands of the Browne administration over the past three and a half years with food prices rising every week “and no incentives to greater production, no relief for farmers or fishermen has been offered.

“From week to week, the prices in the supermarket are climbing.  Hopelessness spread when Antigua and Barbuda learned that our position in the Nutrition rankings is second to last, where we stand just above Haiti.”

Lovell also promised that the party would implement policies to deal with the crime situation, insisting that deal with crime should not be a political issue.

“Under the ABLP tourism has declined.  Visitor arrivals from the USA and England have declined by 11 per cent,” he said, noting that following the damage by Hurricanes Irma and Maria to the ports of The Virgin Islands, Puerto Rico and St. Marteen the cruise sector got a much-needed boost, as ships were diverted to Antigua.

“But what is the plan for Tourism going forward? We can’t wait for storms to blow business our way.  In the past four years, no new resort has actually been built and every tourism project is scheduled to come on stream later this year or next year.  What is to happen in the upcoming season?  I have not heard.  Have you? “

Lovell said that the policies of the UPP administration have been drawn up based on the ongoing consultations that the party has been having with the various stakeholders including the fisherman, mason, unemployed and young entrepreneurs.

“I believe, with all my heart, that God has preserved this United Progressive Party – in the face of all the attacks on its leadership and members – for such a time as this: a time in which we come to deliver hope, happiness, opportunity, prosperity, and empowerment, Lovell said, making reference to various acts of alleged corruption he said that has dogged the ruling party.

He said among the policies to be implemented by a UPP administration include a reduction of 50 percent in annual vehicle licenses and the elimination of radio fees, the removal of taxes on prescription reading glasses and spectacles, funeral expenses and a 50 percent reduction on water rates along with reduced electricity and Internet costs.

Lovell is also promising that the UPP would move to expand the current basket of goods under price control, reduce a; energy prices within two weeks and immediately remove the tax on all cell phones, tablets, laptops and desktop computers for private use.

He is also promising to conclude negotiations for public service salary increases within 90 days and will settle all back-pay before December 31st, 2018.

The party in government would also implement a rent to own option on public housing, incrementally reduce corporate tax to 12.5 percent within its first term as well as establish duty-free zones in English Harbour, Jolly Harbour, Redcliffe Quay and Barbuda.

Moreover, it is promising to repeal the new Barbuda Land Act and the Paradise Found Act ‘Barbuda Land (Amendment) Act of 2017

“The details of these and other benefits will be shared during our next two rallies and during our door-to-door campaign.  But they have been carefully thought out to deliver immediate relief to those most in need, and to stimulate the business sector at the same time.  Our aim is to facilitate that rising tide that will lift all boats,” Lovell said.

Lovell urged supporters to vote in the general election, saying “this is no time to sit it out or to hope that others will do the right thing and you will reap the benefit.

“And, remember this:  We are in a war!  A war!  We will neither retreat nor surrender!  We will go forward and attack!  The other side is going to come at us, at you, with everything at its disposal.  Especially the things it is best at Lies and slander.  Smear tactics.  Provocation – They are already tearing down and destroying our posters.  Even Aggression.  But be careful, be mindful.”

He said he was looking forward to the evening of March 21 when the election results will be known and the country would be shouting “UPP! UPP! UPP!  Free at last! Free at last!  Thank God, Almighty, we are free of the Labour Party at last!”.

Oscars 2018: Four things to take away from this year's awards