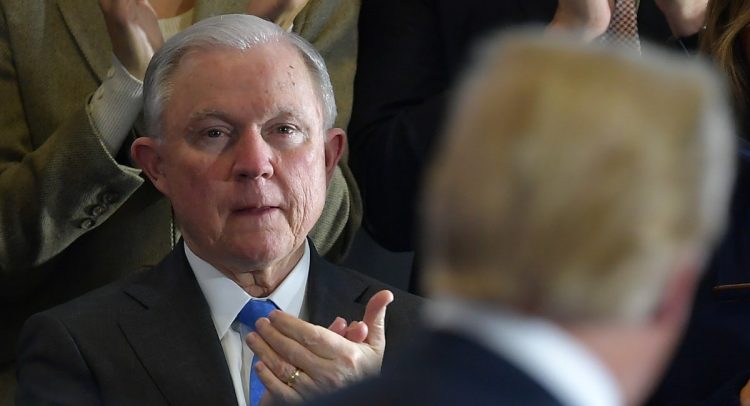 US Attorney General Jeff Sessions hits back at Trump criticism US President Donald Trump drew a sharp rebuttal from his attorney general after giving a scathing assessment of Jeff Sessions as being unable to take control of the Justice Department.

Trump intensified his criticism of the Justice Department in a Fox News interview broadcast on Thursday as the White House grappled to respond to the conviction of former Paul Manafort, Trump’s former campaign chairman, on multiple fraud counts and a plea deal struck by Michael Cohen, Trump’s former personal lawyer, that implicated the president.

Trump reprised a litany of complaints about the Justice Department and the FBI, attacking both without providing evidence they had treated him and his supporters unfairly.

Trump also renewed his criticism of Sessions, blaming him for what he called corruption at the Department of Justice.

“I put in an attorney general who never took control of the Justice Department,” Trump told Fox.

Sessions, in a rare rebuttal to Trump, issued a statement defending the integrity of his department.

Sessions, a longtime US senator and early supporter of Trump’s presidential bid, drew Trump’s ire when he recused himself in March 2017 from issues involving the 2016 White House race.

That removed him from oversight of the federal special counsel’s investigation of Russia’s role in the election and whether Trump’s campaign worked with Moscow to influence the vote. Trump has repeatedly called the investigation a witch-hunt and maintained there was no collusion.

Trump told Fox that Sessions should not have recused himself from Russia-related matters.

However, Trump told “Fox & Friends” he would “stay uninvolved” in department matters.

Al Jazeera’s Heidi Zhou-Castro, reporting from Washington, DC, said that Trump has “long held over Sessions’s head this final option of firing Sessions, which the president has absolute power to do”.

She added, however, that “getting rid of Sessions may not end the Russia investigation and would certainly increase this political firestorm surrounding the president this week”.

In the Fox interview, Trump also said that he respected Manafort for work he had done for prominent Republican politicians, adding that “some of the charges they threw against him, every consultant, every lobbyist in Washington probably does.”

The former Trump campaign chairman was found guilty on Tuesday of eight financial crimes, including tax evasion and bank fraud. The charges stemmed from the investigation into Russian meddling in the 2016 election.

Tuesday’s verdict came as Cohen pleaded guilty to campaign-finance violations and other charges, saying he made payments to influence the 2016 election at the direction of a candidate for federal office.

Trump said Manafort and Cohen were charged with matters unrelated to his presidential campaign, although Cohen implicated Trump, saying he had paid sums of $130,000 and $150,000 each to two women who claimed they had affairs with Trump, acting at his boss’s request, in a bid to buy their silence “with the purpose of influencing the election”.

Cohen did not name Trump on Tuesday, but said one payment was made “in coordination and at the direction of a candidate for federal office”, and the other was made “under direction of the same candidate”.

Asked if he directed Cohen to make the payments, Trump said only that Cohen made both deals. He attacked Cohen, who once said he would “take a bullet” for Trump, for agreeing to a plea deal with prosecutors that made the president look bad.

“It’s called flipping and it almost ought to be illegal,” he said.

Trump was asked whether he thought Democrats would move to impeach him if they won control of the House of Representatives in the November midterm elections.

“I don’t know how you would impeach somebody who’s done a great job,” he said. “If I got impeached, I think the market would crash.”

Shawn Zeller, a deputy editor with the Congressional Quarterly Magazine, said at this point, “Trump’s problem is more political than impeachment”.

“With the election coming in November, all this news about his former associate, Michael Cohen, and former campaign manager, Paul Manafort … threatens Republicans positions in the November elections.”

IICA will launch an ambitious project on resilient agriculture in Dominica