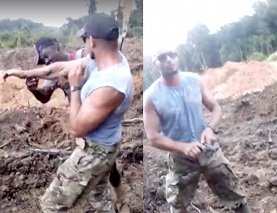 US-based group calls for investigation of Russian operatives in Guyana

A United States-based group is calling on the Guyana government to investigate alleged torture, harassment, assault and abuse of Guyanese by Russian nationals who own and operate West Bank Demerara Gold, Inc. a mining company on the Caribbean country.

In a letter to Guyana President David Granger, the Caribbean Guyana Institute for Democracy (CGID) said that the Russians allegedly committed torture and other crimes against humanity, as well as other human rights abuses of Guyanese citizens, “which the government must not condone.”

Burke said that, on April 3, ranger Ken Edwards and Charles Clarke, employees of Hopkinson Mining Logistics, were executing their normal duties in Quartzstone, near the Quartzstone River, “when they were intercepted by two expatriate, Russian operatives of West Bank Demerara Gold, Inc.

“Hopkinson Mining Logistics ostensibly has mining claims within the CB&R concession that predates its acquisition by West Bank Demerara Gold, Inc.,” Burke said, adding that the Hopkinson security guard recorded the incident with his cellular phone.

“The video recording shows a Russian operative, who is known in the concession area as ‘Batali,’ demanding documentation and challenging Edwards and Charles’ right to be on their employer’s claim,” Burke said. “He subsequently attempted to block their access.

“’Batali’ then punched Edwards in his face,” he claimed. “When Edwards attempted to defend himself, Batali punched him a second time, then pulled a gun on the men.”

Burke said CGID has also obtained additional evidence of a separate incident in which “the said Russians allegedly handcuffed another mining worker and tied him onto the roof of a structure and tortured him.

“The worker was reportedly forced to urinate and defecate while hanging from the roof. These are very serious allegations.

“CGID calls on the entire nation to join in condemnation of these despicable atrocities. If substantiated by the police, these acts constitute crimes against humanity that carry harsh criminal penalties under national and international law,” Burke said,

“CGID, therefore, calls on the Police Commissioner to launch a criminal investigation into the actions of the Russians guards, who should be charged and prosecuted to the fullest extent of the law if they are found to be criminally culpable,” he added.

On Tuesday, the Guyana Ministry of Natural Resources said in a statement that it had ordered an “immediate probe” into incident.

“The Ministry of Natural Resources has noted with deep concern and strong consternation a video circulating on social media which appears to show a confrontation at a mining location between an alleged foreigner and Guyanese miner,” the statement said.

“The video clearly shows that the alleged foreigner is armed with a firearm and behaving in an aggressive, hostile and condescending manner towards the man who appears to be a Guyanese national.

“The images are disturbing on many levels and raise issues about security, the authority of foreigners to carry arms and conflict resolution in the mining sector,” the statement added.

The Ministry of Natural Resources said a report is expected within 48 hours.

Why (almost) everyone needs to stretch when they exercise