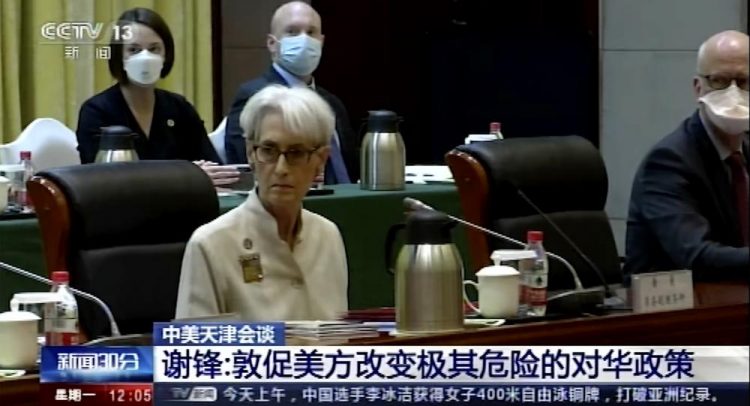 TIANJIN, China (AP) — High-level face-to-face talks between U.S. and Chinese diplomats on Monday highlighted sharp differences between the sides, although the tone appeared somewhat less contentious than at their last meeting.

China issued a long list of demands and complaints, accusing the U.S. of trying to contain and suppress China’s development, while America brought up its concerns about human rights and other issues, and urged cooperation on matters including climate change, Iran and North Korea.

Xie blamed the U.S. for a “stalemate” in bilateral relations, saying some Americans portray China as an “imagined enemy,” according to an official summary of his remarks during the meeting.

Xie met with U.S. Deputy Secretary of State Wendy Sherman at a closed-off resort hotel in Tianjin, about an hour from Beijing. Sherman is the highest-ranking U.S. official to visit China since President Joe Biden took office six months ago.

Relations between the countries deteriorated sharply under Biden’s predecessor, Donald Trump, and the two sides remain at odds over a host of issues including technology, cybersecurity and human rights.

Xie said China wants to seek common ground while shelving differences, highlighting a divide in the basic approach to their relationship. The Biden administration has said it will cooperate in areas such as climate but confront China in others such as human rights, describing the relationship as collaborative, competitive and adversarial.

In a telephone interview with The Associated Press following the talks, Sherman said, “This is a process where we’ve taken another step. We came to these conversations not expecting any specific outcomes.”

Sherman held separate meetings Monday with both Xie, who is in charge of U.S.-China relations, and Foreign Minister Wang Yi.

State Department spokesperson Ned Price described Sherman’s meeting with Wang as a “frank and open discussion about a range of issues, demonstrating the importance of maintaining open lines of communication between our two countries.”

Price said Sherman raised concerns about human rights, including in Hong Kong and Tibet, and what he called the “ongoing genocide and crimes against humanity in Xinjiang.” He said Sherman also raised issues of media access and freedom of the press, Beijing’s conduct in cyberspace and actions toward Taiwan and in the East and South China Seas.

Sherman discussed cases of American and Canadian citizens detained in China or under exit bans, and reiterated concerns about China’s unwillingness to cooperate with the World Health Organization and allow a second-phase investigation inside China into COVID-19’s origins, Price said.

He said Washington should end measures against Chinese enterprises, students, educational outlets and media and withdraw the extradition request for Meng Wanzhou, the Huawei executive who was detained in Canada.

Sherman said the sides did not discuss a possible meeting between Biden and Chinese President Xi Jinping, which some observers have speculated could take place on the sidelines of the G-20 summit in Rome at the end of October.

America’s No. 2 diplomat travels next to Oman, where she will meet Deputy Foreign Minister Sheikh Khalifa Al Harthy on Tuesday. She met with officials in Japan and South Korea last week.

In this image taken from a video footage run by China’s CCTV via AP Video, U.S. Deputy Secretary of State Wendy Sherman, front left, and her delegation meet Chinese counterpart in Tianjin, China Monday, July 26, 2021. China blamed the U.S. for what it called a “stalemate” in bilateral relations as high-level face-to-face talks began Monday. (CCTV via AP Video)