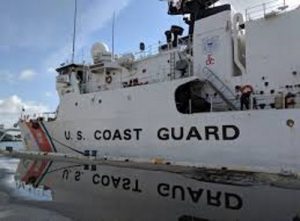 US Coast Guard warns of ‘dangerous, illegal’ migration attempts from the Caribbean

The United States Coast Guard on Saturday continued to discourage Caribbean migrants from conducting what it describes as “dangerous, illegal voyages on unsafe and unseaworthy vessels.”

The vessel was interdicted with 14 Haitian migrants and two suspected smugglers.
This followed a similar incident, the previous day in which a helicopter crew, deployed to Great Inagua in The Bahamas, detected a migrant vessel about 49 miles southeast of Great Inagua.

Along with a Royal Bahamas Defence Force vessel, the US Coast Guard interdicted about 177 Haitian migrants, seven of those being minors, aboard an overloaded 45-foot wooden freighter.

In addition, on that same day, the Coast Guard Cutter Winslow Griesser repatriated 18 Dominican Republic migrants to a Dominican Republic Navy patrol vessel , following the interdiction of an illegal migrant voyage off the coast of Aguadilla, Puerto Rico.

According to the Coast Guard, the interdictions are the result of ongoing efforts in support of Operation Unified Resolve, Operation Caribbean Guard and the Caribbean Border Interagency Group (CBIG).

“I’m glad that our crew was able to safely recover all the migrants and provide them with the humanitarian assistance they required,” said Lt. Luke A. Walsh, USCGC Winlow Griesser commanding officer.

“This group is very fortunate, the dangers in the Mona Passage are quite real, as migrants risk losing their lives at the hands of ruthless smugglers whose vessels are ill equipped with little or no emergency and lifesaving equipment onboard,” he added.

Cmdr. Michael Vega, Coast Guard 7th District enforcement branch, said the US Coast Guard “continues to maintain a focused and coordinated effort with multiple agency assets to interdict any attempt to dangerously and unlawfully immigrate by sea to the United States.

“Those who are interdicted at sea attempting to illegally immigrate will be repatriated to their country in accordance with existing US immigration policy,” he said.

The US Coast Guard said, altogether, about 4,567 migrants have attempted to illegally enter the US via the maritime environment since October 1 – the beginning of the 2019 fiscal year, compared to 4,302 migrants in the fiscal year 2018.

Of that number , 4,567 migrants, 311 were Cuban migrants, 2,785 Haitian migrants, 1,361 Dominican Republic migrants, and 172 migrants of various nationalities attempting to enter into the United States illegally from the Bahamas.

The US Coast Guard said these numbers represent the total number of at-sea interdictions, landings and disruptions in the Florida Straits, the Caribbean Sea and the Atlantic Ocean.

‘Come Back Home’ - President Of Ghana Invites Jamaicans To Africa