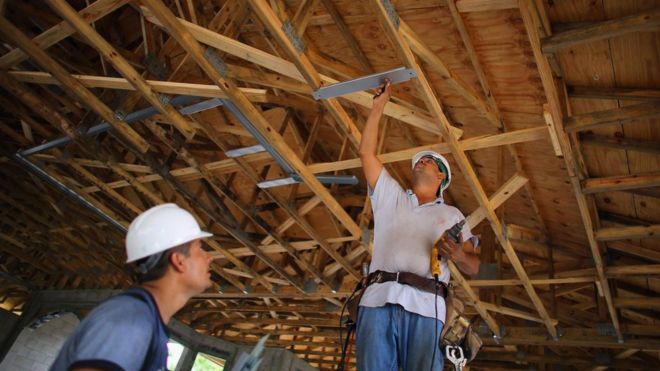 The US economy grew at an annual rate of 2.2% in the first three months of the year, slightly more slowly than the original estimate of 2.3%.

The Commerce Department published the revision on Wednesday in its second estimate of GDP.

It said exports, inventory investments and consumer spending were weaker than first reported.

The declines exacerbated the slowdown from the fourth quarter of 2017, when US GDP increased by 2.9%.

The first quarter is typically the weakest of the year and many economists expect economic growth to accelerate in coming months, as some activity shifts later in the year.

Compared with the first quarter of 2017, GDP – the measure of goods and services produced in the US, adjusted for inflation – increased by 2.8%, the fastest rate since 2015.

However, some metrics continue to lag behind expectations.

The Fed has said it is aiming for an inflation rate of about 2%.

Wednesday’s report showed consumer spending increased just 1% in the first quarter, instead of 1.1% as originally reported. That marked the weakest growth in almost five years.

However, business investment was higher than previously reported, driven by a more than 10% increase in spending on intellectual property.

The Commerce Department also said the new US tax cut, which reduced the corporate rate from 35% to 21%, was having an effect.