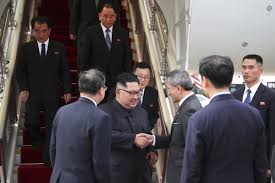 The US says its discussions with North Korea are moving “more quickly than expected” ahead of the joint summit in Singapore on Tuesday.

The preliminary talks between officials have been taking place ahead of the highly anticipated first meeting.

The White House also confirms that President Donald Trump and Kim Jong-un will hold a one-on-one meeting, with only translators present.

Mr Trump will then leave the country that same evening.

Earlier, North Korea’s state media talked about a “new relationship” with the US.

And the US has said it will offer North Korea “unique” security assurances in return for denuclearisation, according to Secretary of State Mike Pompeo.

He insisted the US would accept nothing less than complete denuclearisation.

What’s the feeling ahead of the talks?

The US president and North Korean leader are staying in separate hotels, not far from each other, and will meet on Tuesday at a hotel on Sentosa, a popular tourist island a few hundred metres off the main island of Singapore.

Their first meeting will be just the two men, with their translators, without any advisers present.

Mr Trump has said he has a “good feeling” about Tuesday’s much-anticipated summit.