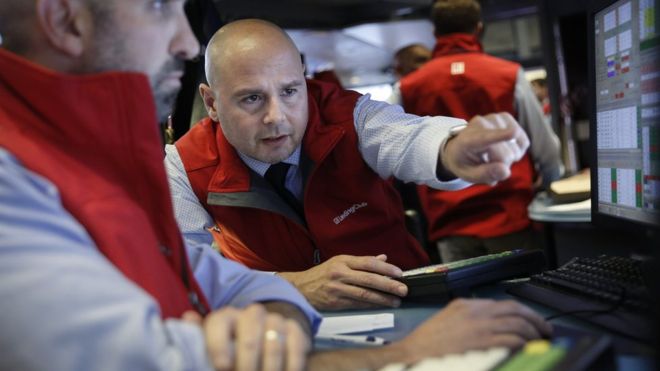 The S&P 500 index of US stocks hit a record today amid signs of progress in US-China trade talks.
The index touched 2,977.93, beating 21 June’s previous high, with technology stocks driving the rise.
Market watchers say more optimism around a potential trade deal between the US and China led to the movement.
And gold, often seen as a safe asset in times of uncertainty, fell 2% to $1,382 per ounce, the biggest drop since June 2018.

“Gold tends to do well during times of concern over growth, market volatility or when markets think the powers-that-be are losing control of events,” said Russ Mould, investment director at stockbroker AJ Bell.

“A trade deal would deal with all three issues and markets are happy to take the view that a deal is coming. Though it could still be a long time coming, if there is to be one at all.”

Trade row
Negotiations between China and the US have dominated market moves for months as positive statements are often followed by extra tariffs, sending stock, currency and commodity markets up and down.

The latest moves follow a pledge to renew talks between the US and China, an agreement that was reached at the G20 summit in Japan.

US President Donald Trump agreed to hold off on $300bn of new tariffs on goods and relaxed restrictions on Huawei, while China agreed to make new purchases of US farm equipment.

Last year, the US imposed three rounds of tariffs on more than $250bn worth of Chinese goods. China hit back by imposing tariffs ranging from 5% to 25% on $110bn of US products.

A truce agreed last December collapsed and in May the US raised tariffs on $200bn of Chinese products to 25% from 10%. Again China retaliated with tariff on $60bn of US goods.

‘Strong run’
The price of gold is also retreating after gaining 8% in June, with prices exceeding $1,400 per troy ounce.

“Gold has just had a strong run. Nothing goes up in a straight line,” said Mr Mould.

While it earns no income, like a share or a bond would, gold’s indestructible nature and its place in history as a store of value make it attractive to some investors in times of strife.