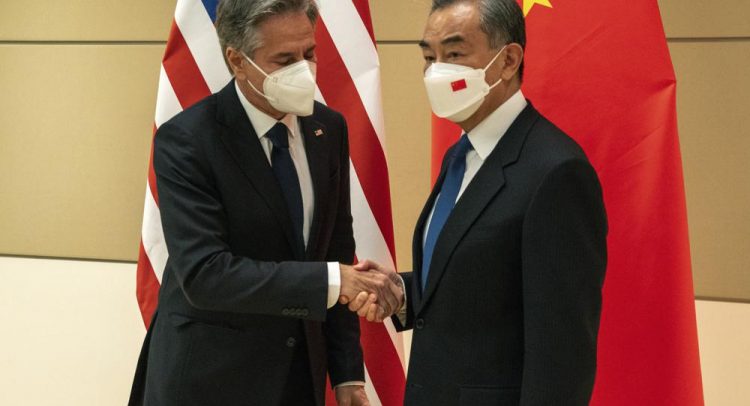 US steps up diplomatic efforts with China on Taiwan, Russia

NEW YORK (AP) — The Biden administration on Friday ramped up its diplomatic efforts to press China to end provocative actions against Taiwan and warned it about any active support for Russia in its war against Ukraine.

Secretary of State Antony Blinken made both cases in a meeting with his Chinese counterpart on Friday in a meeting on the sidelines of the annual U.N. General Assembly in New York, according to U.S. officials. The session was one of the few that Blinken kept on his schedule after the death of his father on Thursday.

The officials wouldn’t describe the Chinese response, but said Foreign Minister Wang Yi was receptive to the messages and that the two men discussed the need “to maintain open lines of communication and responsibly manage the U.S.-China relationship, especially during times of tension.”

The talks between Blinken and Wang come amid a period of intense tensions on both issues and ahead of an expected meeting in November between Presidents Joe Biden and Xi Jinping. Biden’s recent comments about Taiwan and China’s tacit support for the war in Ukraine are just two of the latest irritants in relations between Washington and Beijing.

State Department spokesman Ned Price said Blinken had affirmed to Wang the administration’s commitment to “maintaining peace and stability across the Taiwan Strait” despite Biden’s assertion earlier this week that the U.S. would send troops to defend Taiwan in the event of a Chinese invasion.

China regards the self-governed island of Taiwan as its sovereign territory, has not ruled out force to reunify it with the mainland and has in recent months stepped up military activity in the area. That activity is at least partially in response to high-level U.S. congressional visits to Taipei, including by House Speaker Nancy Pelosi, and stepped-up American arms sales.

Blinken “stressed that preserving peace and stability across the Taiwan Strait is critical to regional and global security and prosperity,” Price said in a statement. It added that the U.S. remains committed to its “one-China policy” which does not support Taiwanese independence.

On Russia, U.S. officials said Blinken underscored the damage that would be done to the Sino-U.S. relationship should Beijing take a more active role in supporting the war in Ukraine. U.S. officials have said they are cautiously optimistic about recent comments from Chinese leaders about their concerns over the war and its consequences, and Blinken wanted to drive the point home.

Blinken “highlighted the implications if the PRC were to provide support to Moscow’s invasion of a sovereign state,” Price said in the statement. “PRC” refers to China’s formal name, the People’s Republic of China.

The U.S.-China relationship has become increasingly fraught in recent years over multiple issues, including the persecution of Muslims and ethnic minorities in China’s western Xinjiang region, clampdowns on dissent in Tibet and Hong Kong, aggressive Chinese actions in the South China Sea and against Taiwan, and the handling of the coronavirus pandemic.

Nonetheless, Price said the U.S. continues to be “open to cooperating with the PRC where our interests intersect.” One area the U.S. hopes to continue coordination is on climate change.