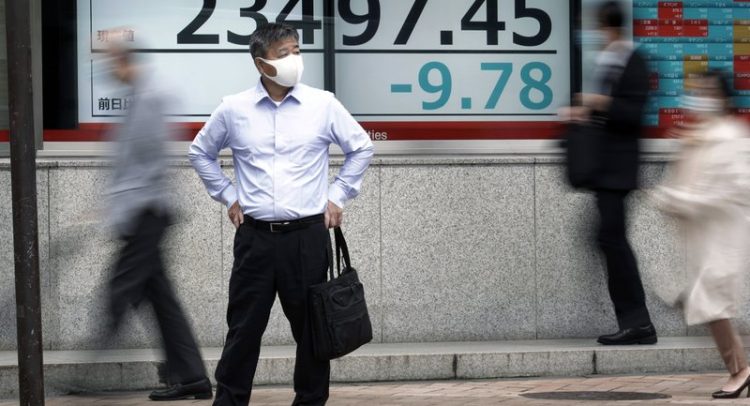 US stocks head higher at the end of another bumpy week

Stocks are opening higher on Wall Street, putting the market on track to end a choppy week of trading slightly higher. If the gains hold, the S&P 500 would mark its third straight weekly gain. In the first few minutes of trading Friday, the benchmark index was up 0.4%. Retailers and other companies that rely on spending by consumers were doing well after the government reported that retail sales rose in September for the fifth straight month and well above the rate that economists were expecting. European markets were also higher while Asian markets ended mixed. Treasury yields held steady.

THIS IS A BREAKING NEWS UPDATE: AP’s earlier story appears below.

Global shares were mixed on Friday as investors weighed concerns about a U.S. economic stimulus package, on top of flaring outbreaks of coronavirus.

Markets have turned cautious this week amid a confluence of worrisome trends amid the pandemic. Coronavirus infections are rising in Europe, prompting governments in France and Britain to impose new measures to contain the outbreak. Caseloads area also climbing in the Americas and parts of Asia.

In the U.S., investor optimism that the Trump administration and Congress will soon reach a deal on another round of stimulus for the economy has waned.

“The markets’ on again off again love affair with an impending stimulus torrent masks the fact that investor uncertainty is bristling ahead of an expected choppy period in terms of headline risk,” Stephen Innes of Axi said in a commentary.

Meanwhile, campaign theatrics continue, with the latest question whether the debate scheduled next week between President Donald Trump and former Vice President Joseph Biden will go ahead as planned. The clash planned for this week was called off after Trump’s bout of coronavirus. Biden has said he plans to participate in next week’s debate but intends to ask Trump to take a COVID-19 test before arriving.

Investors are also watching for earnings reports for indications of how businesses are holding up amid the pandemic. Rising COVID-19 cases may bring more social distancing restrictions and limits on public life, including a possible return to lockdowns that are damaging to growth.

In energy trading, benchmark U.S. crude lost 28 cents to $40.68 a barrel in electronic trading on the New York Mercantile Exchange. It gave up 8 cents on Thursday to $40.96. Brent crude, the international standard, fell 35 cents to $42.81 a barrel.