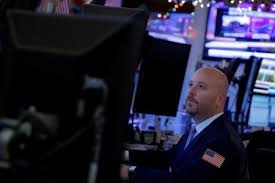 U.S. stock index futures fell more than half a percent as Wall Street returned from a long holiday weekend on Tuesday, a rise in bond yields and underwhelming results from Walmart halting a six-day winning streak for the major indexes.

Shares of the United States’ biggest brick-and-mortar retailer fell 3.6 percent in premarket trading after it reported a lower-than-expected quarterly profit.

Other big decliner was Qualcomm, which fell 2.9 percent after the chipmaker raised its offer to buy NXP Semiconductors NV to $127.50 per share from $110. NXP shares rose 6.2 percent.

The S&P 500 racked up its biggest weekly increase in five years last week, easing fears that a deeper market correction was taking hold after a handful of large daily losses at the start of February.

The spark for those falls was a rise in U.S. bond yields, however, and benchmark 10-year Treasury bond yields hit four-year highs of 2.9042 percent in early trade on Tuesday.

Minutes from the U.S. Federal Reserve’s January meeting on Wednesday will be at the center of this week’s trade, eyed for more clues on the central bank’s view on inflation and the pace of future interest rate rises.

Traders are pricing in an 83 percent chance that the Fed will raise its main rates again in March, according to the CME Group’s FedWatch tool.

Wall Street’s fear gauge, the CBOE volatility index, also edged up to 21.01, slightly above Friday’s close of 19.46, but way off the 50 points it hit during the peak of the sell-off.

Rite Aid was the most traded stock premarket, jumping 28 percent after the Wall Street Journal reported grocery chain operator Albertsons Companies planned to buy the part of the drug retailer that is not being bought by Walgreens Boots.

Snapchat operator Snap slid 4.7 percent after Citigroup slapped a “sell” rating on the stock, arguing negative reviews on an app redesign might point to a decline in users.

Of the 399 companies in the S&P 500 that reported in the quarterly earnings season through Friday, 76.4 percent have topped profit expectations, according to Thomson Reuters I/B/E/S. That is above the 72 percent beat-rate, on average, over the past four quarters. (Reporting by Sruthi Shankar in Bengaluru; editing by Patrick Graham)