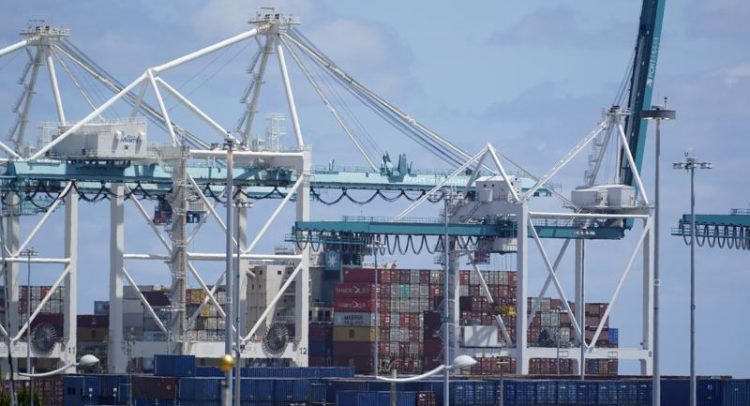 WASHINGTON (AP) — The U.S. trade deficit increased to a record $75.7 billion in June as a rebounding American economy sent demand for imports surging.

The Commerce Department reported Thursday that the deficit rose 6.7% from a revised May deficit of $71 billion. The June deficit set a record, topping the old mark of $75 billion set in March. The trade deficit represents the gap between what the country exports to the rest of the world and what it purchases from other countries.

Donald Trump made China a principal target of his trade policies, accusing the country of violating trade laws to gain unfair advantages over American companies and workers. Trump imposed a variety of tariffs on China, triggering a tit-for-tat trade war in which the Chinese retaliated by imposing higher tariffs on U.S. goods such as soybeans.

Through the first six months of this year, the U.S. trade deficit totals $428.6 billion, up 46.4% from the deficit during the same period in 2020, a time when Americans’ demand for imports was being dampened by the pandemic.

Analysts said the surge in the deficit may start to slow in coming months as the initial boom in consumer spending from the economy’s re-opening starts to level off and increased growth in foreign countries helps to boost U.S. export sales.

“With the peak in consumer goods demand behind us, we expect consumer goods imports to weaken from here while survey measures of export orders support that exports growth is set to strengthen,” said Michael Pearce, senior U.S. economist at Capital Economics.

With the U.S. economy rebounding much more quickly than the rest of the world, U.S. demand for imported goods is out-stripping a slower increase in foreign countries’ appetite for U.S. exports.

The widening trade deficit has been a drag on the economy this year. While the overall economy, as measured by the gross domestic product grew at a strong rate of 6.5% in the April-June quarter, the trade deficit subtracted 0.4 percentage-points from GDP growth.

The deficit in just goods trade totaled $93.2 billion in June, a figure that was reduced by a $17.4 billion surplus the U.S. recorded in trade in services. The United States typically runs surpluses in services, items such as airline travel and hotels, but that figure has been depressed this year because of the pandemic’s impact on foreign travel.

In this April 9, 2021 photo, cargo containers are shown stacked near cranes at PortMiami in Miami. The U.S. trade deficit increased, Thursday, Aug. 5,, to a record $75.7 billion in June as a rebounding American economy sent demand for imports surging. (AP Photo/Wilfredo Lee)

The tabling of The Bureau of Standards Bill, 2021 is significant