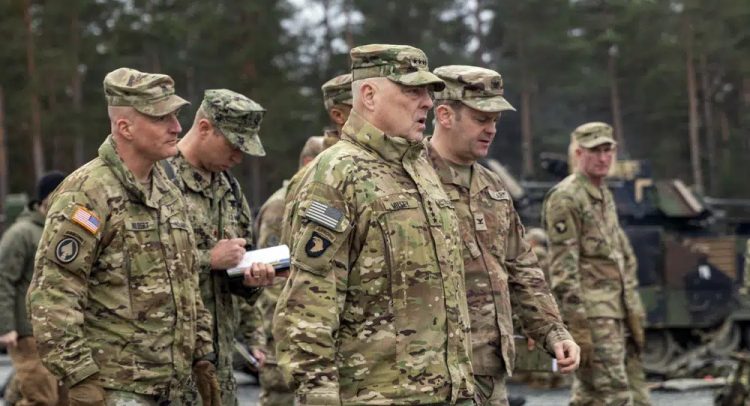 A MILITARY BASE IN SOUTHEASTERN POLAND (AP) — The top U.S. military officer, Army Gen. Mark Milley, traveled to a site near the Ukraine-Poland border on Tuesday and talked with his Ukrainian counterpart face to face for the first time — a meeting underscoring the growing ties between the two militaries and coming at a critical time as Russia’s war with Ukraine nears the one-year mark.

Milley, the chairman of the Joint Chiefs of Staff, met for a couple of hours with Ukraine’s chief military officer, Gen. Valerii Zaluzhnyi, at an undisclosed location in southeastern Poland. The two leaders have talked frequently about Ukraine’s military needs and the state of the war over the past year but had never met.

The meeting comes as the international community ramps up the military assistance to Ukraine, including expanded training of Ukrainian troops by the U.S. and the provision of a Patriot missile battery, tanks and increased air defense and other weapons systems by the U.S. and a coalition of European and other nations.

It also marks a key time in the war. Ukraine’s troops face fierce fighting in the eastern Donetsk province, where Russian forces — supplemented by thousands of private Wagner Group contractors — seek to turn the tide after a series of battlefield setbacks in recent months.

Army Col. Dave Butler, a spokesman for Milley, told two reporters traveling with the chairman that the two generals felt it was important to meet in person. The reporters did not accompany Milley to the meeting and, under conditions set by the military, agreed to not identify the military base in southeastern Poland where they were located.

“These guys have been talking on a very regular basis for about a year now, and they’ve gotten to know each other,” Butler said. “They’ve talked in detail about the defense that Ukraine is trying to do against Russia’s aggression. And it’s important — when you have two military professionals looking each other in the eye and talking about very, very important topics, there’s a difference.”

Butler said there had been some hope that Zaluzhnyi would travel to Brussels for a meeting of NATO and other defense chiefs this week, but when it became clear on Monday that it would not happen, they quickly decided to meet in Poland, near the border.

While a number of U.S. civilian leader s have gone into Ukraine, the Biden administration has made it clear that no uniformed military service members will go into Ukraine other than those connected to the embassy in Kyiv. Butler said only a small group — Milley and six of his senior staffers — traveled by car to the meeting.

He said that the meeting will allow Milley to relay Zaluzhnyi’s concerns and information to the other military leaders during the NATO chiefs’ meeting. Milley, he said, will be able to “describe the tactical and operational conditions on the battlefield and what the military needs are for that, and the way he does that is one by understanding it himself but by also talking to Zaluzhnyi on a regular basis.”

Milley also will be able to describe the new training of Ukrainian forces that the U.S. is doing at the Grafenwoehr training area in Germany. The chairman, who got his first look at the new, so-called combined arms instruction during a nearly two-hour visit there on Monday, has said it will better prepare Ukrainian troops to launch an offensive or counter any surge in Russian attacks.

More than 600 Ukrainian troops began the expanded training program at the camp just a day before Milley arrived.

Milley and Zaluzhnyi’s meeting kicks off a series of high-level gatherings of military and defense leaders this week. Milley and other chiefs of defense will meet in Brussels on Wednesday and Thursday, and then the so-called Ukraine Contact Group will gather at Ramstein Air Base in Germany on Thursday and Friday. That group consists of about 50 top defense officials, including Defense Secretary Lloyd Austin, and they work to coordinate military contributions to Ukraine.

The meetings are expected to focus on Ukraine’s ongoing and future military needs as the hard-packed terrain of the winter months turns into muddy roads and fields in the spring.

After several months of losing territory it had captured, Russia in recent days claimed it took control of the small salt-mining town of Soledar. Ukraine asserts that its troops are still fighting, but if Moscow’s troops take control of Soledar it would allow them to inch closer to the bigger city of Bakhmut, where fighting has raged for months.

And in a barrage of airstrikes over the weekend, Russia struck Kyiv, the northeastern city of Kharkiv and the southeastern city of Dnipro, where the death toll in one apartment building rose to 44.

Western analysts point to signs that the Kremlin is digging in for a drawn-out war, and say the Russian military command is preparing for an expanded mobilization effort.

(Staff Sgt. Jordan Sivayavirojna/U.S. Army via AP): In this image provided by the U.S. Army, U.S. Chairman of the Joint Chiefs of Staff Gen. Mark Milley meets with U.S. Army leaders responsible for the collective training of Ukrainians at Grafenwoehr Training Area, Grafenwoehr, Germany, on Monday, Jan. 16, 2023. At left is Brig. Gen. Joseph E. Hilbert, who is the commanding general for the 7th Army Training Command. Milley visited the training site in Germany for Ukrainian forces and met with troops and commanders.