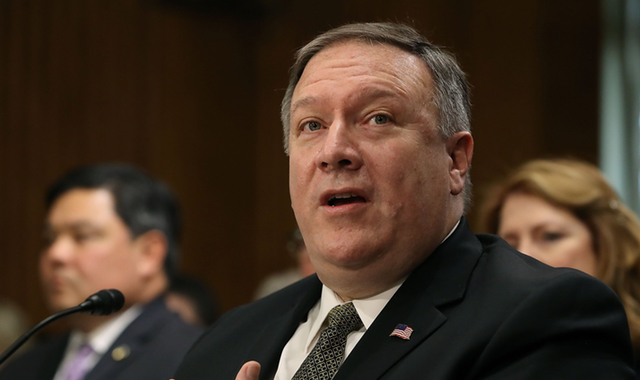 US vows ‘strongest sanctions in history’ on Iran

Secretary of State Mike Pompeo has said the US is imposing the “strongest sanctions in history” on Iran.

In a speech in Washington, America’s top diplomat said Iran would be “battling to keep its economy alive” after the sanctions took effect.

His Iranian counterpart said the US was a prisoner of its “failed policies” and would suffer the consequences.

Earlier this month, President Donald Trump took the US out of the landmark 2015 Iran nuclear deal.

EU foreign policy chief Federica Mogherini said Mr Pompeo had not demonstrated in his speech how abandoning the deal made the region safer from the threat of nuclear proliferation.

What can Iran expect to see and when?

US sanctions lifted after the 2015 deal will be re-imposed, Mr Pompeo said, and those and new measures will together constitute “unprecedented financial pressure on the Iranian regime”.

The older American sanctions prohibited almost all trade with Iran, making some exceptions only for activity “intended to benefit the Iranian people” such as the export of medical and agricultural equipment.

The secretary of state did not say what new measures Washington was contemplating but he described sanctions imposed last week on the head of Iran’s central bank as “just the beginning”.

Some of Europe’s biggest firms who rushed to do business with Iran after the nuclear deal now find themselves forced to choose between investing there or trading with the US.

Some of the biggest contracts at risk include:

•French energy giant Total’s deal, worth up to $5bn, signed to help Iran develop the world’s largest gas field. Total now plans to unwind those operations by November unless the US grants it a waiver

•An Airbus deal to sell 100 jets to IranAir

Iran is one of the world’s largest oil producers, and the export of oil and gas is worth billions of dollars each year.

Both the country’s oil output and its GDP fell noticeably under international sanctions.

The sanctions will not be re-imposed on Tehran immediately but are subject to three-month and six-month wind-down periods.

Javad Zarif said America was “regressing to old habits”. Iran, he added, was working with the other partners of the nuclear deal to find a solution.

Ms Mogherini said there was “no alternative” to the JCPOA.

What are the demands Washington is making?

Mr Pompeo laid out 12 conditions for any “new deal” with Iran, including the withdrawal of its forces from Syria and an end to its support for rebels in Yemen.

•Giving the International Atomic Energy Agency (IAEA) a full account of its former nuclear military programme, and giving up such work forever

•Ending its “threatening behaviour” towards its neighbours, including “its threats to destroy Israel, and its firing of missiles into Saudi Arabia and the UAE”

•Releasing all US citizens, and those of US partners and allies, “detained on spurious charges or missing in Iran”

Why is Iran seen as a regional threat?

It has spread its influence across parts of the Middle East where there are large communities of fellow Shia Muslims, from Iraq to Lebanon.

Its support for Lebanon’s Hezbollah movement is particularly alarming for Israel while Saudi Arabia, another bitter enemy, accuses the Iranians of equipping rebels in Yemen.

In the Syrian civil war, it is one of President Bashar al-Assad’s few outside allies, sending thousands of fighters and military advisers.

Is the US on its own?

Israel praised the Trump administration’s decision to pull out of the pact but the move was roundly criticised by fellow signatories, including France, Germany, the UK and Russia. Mr Pompeo has made clear he expects the backing of his allies in Europe but also called for support from “Australia, Bahrain, Egypt, India, Japan, Jordan, Kuwait, Oman, Qatar, Saudi Arabia, South Korea [and] the UAE”.

“We welcome any nation which is sick and tired of the nuclear threats, the terrorism, the missile proliferation and the brutality of a regime at peace with inflicting chaos on innocent people,” he said.

The Joint Comprehensive Plan of Action (JCPOA) saw Iran agree to limit the size of its stockpile of enriched uranium – which is used to make reactor fuel but also nuclear weapons – for 15 years and the number of centrifuges installed to enrich uranium for 10 years.

Iran also agreed to modify a heavy water facility so it could not produce plutonium suitable for a bomb.

In return, sanctions imposed by the UN, US and EU that had crippled Iran’s economy were lifted.

The deal was agreed between Iran and the five permanent members of the UN Security Council – the US, UK, France, China and Russia – plus Germany.

Iran insists its nuclear programme is entirely peaceful, and its compliance with the deal has been verified by the IAEA.