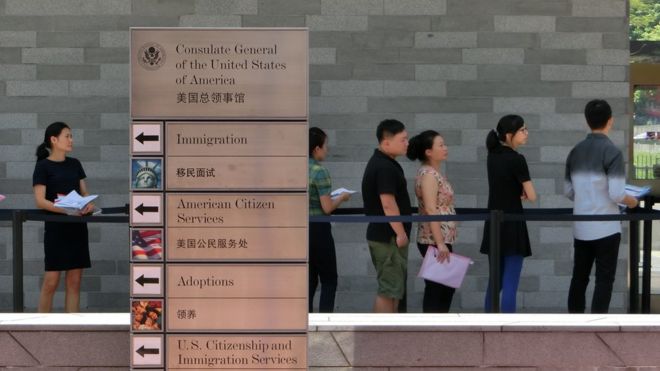 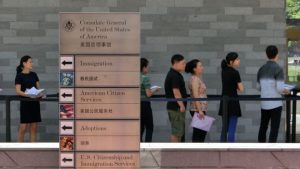 The US state department has urged its staff in China to alert them to any abnormal hearing or vision issues after one employee reported mystery symptoms.

The person experienced “subtle and vague, but abnormal, sensations of sound and pressure”, a statement said.

The US previously said its diplomats in Cuba had suffered similar symptoms after suspected sonic attacks.

China-US relations have been strained recently, with the threat of a trade war looming.

The US has not accused China of being behind the issues.

What happened in China?

Embassy spokeswoman Jinnie Lee said the employee suffered a “variety of physical symptoms” between late 2017 and April 2018 while working at the US consulate in the city of Guangzhou.

The employee was sent back to the US, and on 18 May the embassy learnt that they had been diagnosed with mild traumatic brain injury (MTBI), Ms Lee added.

“We do not currently know what caused the reported symptoms and we are not aware of any similar situations in China, either inside or outside of the diplomatic community,” the US diplomatic statement said.

“The US government is taking these reports seriously and has informed its official staff in China of this event,” it said.

The statement continues with a warning: “While in China, if you experience any unusual acute auditory or sensory phenomena accompanied by unusual sounds or piercing noises, do not attempt to locate their source. Instead, move to a location where the sounds are not present.”

Ms Lee said the Chinese government had given assurances that it was also investigating and taking appropriate measures.