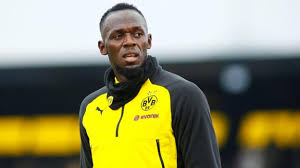 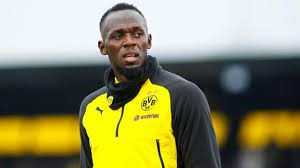 The Jamaican sprinter, 31, is scheduled to play a training match against Norway Under-19s in his week at the club.

“Maybe a club will see something and decide to give me a chance,” said Bolt, who is preparing for a charity game.

He will captain a team of celebrities and footballers at the Soccer Aid match for Unicef on 10 June at Old Trafford.

“He is a good football player, otherwise he would not have been training with us,” said Stromsgodset director of football Jostein Flo.

Flo said Bolt had been given shirt number 9.58 – his world record time for the 100m.

The Manchester United fan has spoken previously about wanting to get into professional football, having retired from athletics last year.

His arrival at Stromsgodset was a surprise for the players.

Flo, a former Sheffield United striker, said: “We told them a player was coming to try out and that he was damn fast – the door opened, and Bolt came in. It was a shock for them, they couldn’t believe it.

“He is one of the greatest athletes throughout all ages, and of course we can learn a lot from him.

“His presence will undoubtedly be a great inspiration for players, coaches, and the whole club.”

St. Kitts and Nevis' CBI programme continues to stand out amongst the best in the world