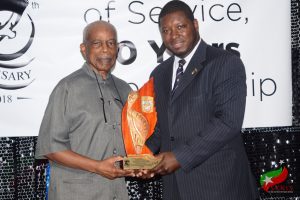 Sir Kennedy is the first alumnus in the Federation to receive the prestigious award from the UWIAA St. Kitts and Nevis Chapter. The award reads: “The UWIAA St. Kitts and Nevis Chapter presents the Pelican Award to Dr. the Right Excellent and the Rt. Honourable, Sir Kennedy Alphonse Simmonds NH KCMG for his sterling contribution to the University of the West Indies, Caribbean Integration and national development and excellence in health science and medicine, August 01, 2018.”

His Excellency Simmonds expressed thanks to all who played a part in his achievement.

“This is one occasion that I can say I am truly surprised, very much surprised. Thank you all very much for this very important and prestigious award,” said Sir Kennedy, noting that he has one other award from Chancellor Hall, which he values highly. “I do place great value on this award from my own people and from my own campus here in St. Kitts and Nevis. Thank you very much.”

Craig Tuckett, President of UWIAA St. Kitts and Nevis, in giving the history of the award said that the Pelican Award is the highest award that the UWIAA Chapter may bestow.

“It is thus highly prestigious. The Pelican Award is a special alumni accolade and indicates how very proud the fellow alumni of the awardee are in his or her national, regional and international success and renown,” he said. “The Pelican Award is considered to be a role model of the University of the West Indies population globally and in particular, in the current cohort of students and in the jurisdiction where they reside, who themselves are to be a role model for future generation alumni and also members who will pass through the walls of this great university of ours.”

The award was presented during a ceremony at Government House where hundreds of persons gathered to celebrate Emancipation Day, UWI Global Giving Week and the 70th Anniversary of UWI.