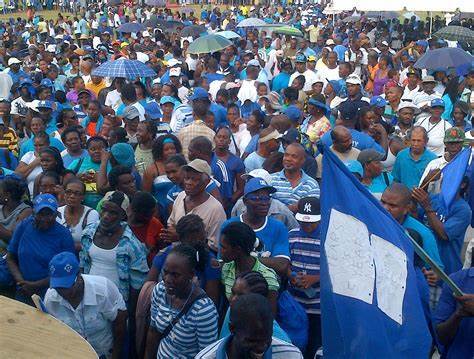 As we continue to grow and strengthen our organization we implore all stakeholders to join us in our quest to develop our Nature Isle. We welcome the opportunity to speak directly to the Dominican public on a few key issues of National importance one of which is electoral reform.

Permit me to begin by empathizing with the people of the entire South East who are still reeling under the effects of the recent trough. To the family of Mr. Henson Durand I express special sympathies to you. May God continue to strengthen you and Dominica by extension as we seek to recover from this ordeal. Unfortunately this situation is being compounded by the continuing neglect, stalled roadworks, and the destruction of the natural environment in the area by the government of Dominica.

Concerning the all-important matter of Electoral Reform we continue to hold firm to the view that this process, which has been started must be completed before the holding of General elections in Dominica. To the members of the United Workers Party and the overwhelming number of Dominicans, resolving the issue of Electoral Reform is non-negotiable.

After all, rectifying issues of a bloated voters list and the non-issuance of identification cards are at the heart of our democratic system. We note that Sir Dennis Byron who was appointed by the government of Dominica to review our electoral process has completed his initial work and will shortly be providing us and the government of Dominica with his draft report and a copy of the supporting draft legislation.

We continue to urge the government of Dominica to urgently implement the required reforms and commit to the holding of fresh elections as soon as the process is complete.

The announcement of the “sham” December 6 election, more than 30 months before elections were constitutionally due and without promised electoral reforms, was the main reason why our Party decided to withdraw its participation from the polls. In that regard, we call upon the election observers coming in from the Commonwealth Secretariat and the
Organization of American States to take careful note of the vexing circumstances under which this snap election is being conducted.

An election process that is so deeply flawed, and weighted in favour of the ruling party should never be considered as being either free or fair. Based on the current threat to our democracy, the United Workers Party again calls on His Excellency the President to exercise his executive authority granted under Article 58 of our country’s Constitution, to suspend his election writ, and postpone the holding of elections until such a time that the electoral reform process is complete.

Furthermore, we call upon the regional governments, and the international community to denounce the holding of this election and also not to recognize whichever government that emerges out of this process. At this point let me assure the people of Dominica that the UWP is doing everything within its legal and constitutional rights to ensure that electoral reforms are completed.

Another important matter that we wish to draw to the attention of the public is the fact that no less than eight (8) members of the UWP have since 2017, been brought before the courts by this government on various charges including incitement and treason, at tremendous financial and other costs to the Dominican public. These members are: Trustee and Founding Member Mr. Edison James, Leader of the Opposition Hon. Lennox Linton, Hon. Hector John former MP for the Salisbury Constituency, Hon. Danny Lugay former MP for the Roseau North Constituency, Mr. Nicholas George, UWP General Secretary, Dr. Sam Christian UWP candidate in the 2019 election, Mr. Brian Linton, and myself Dr. Thomson Fontaine Political Leader of the United Workers Party.

We view these charges as been largely frivolous and meant to either intimidate or stifle the legitimate opposition. Meanwhile, the Prime Minister has encouraged his followers to “throw hot water” on members of the opposition, Minister Reginald Austrie has called, to use his words, “disappear the opposition,” while labour party operative Lennox Lawrence has called for the hunting down of the opposition like terrorists. The fact remains that absolutely no action has been taken against those who continue to incite violence against the opposition.

I now, therefore, call on this government and the police authorities to immediately withdraw these bogus charges against all eight opposition members and allow us to go about our lives, and doing the work of the people of Dominica freely.

Let me now turn your attention to the areas that our Party, following our delegates’ conference, will be focused on in the coming weeks. As a priority we will immediately begin strengthening, renewing and expanding our Party’s base. We will explore new ways to assist in the welfare of our residents and actively engage with the diaspora as we seek to build and expand.

Finally, the United Workers Party is calling on all Dominicans to join us on Sunday 11 December from 3:00 P.M in a nation-wide solidarity rally to hear of the Party’s plans for this our beautiful country.

As we embark on this new era in our political history, let me assure the Dominican Public that the United Workers Party remains committed to good governance and to promoting an improved standard of living for our people. We continue to urge the people of Dominica to demand good and accountable government and insist that this government completes the electoral reform as quickly as possible.

As I close I wish to note that our Party continues to work with the Electoral Reform Coalition, which is comprised of opposition parties, civil society organizations, and the Public Service Union. As part of this effort for electoral reforms we will be engaged in a number of activities to strengthen our demand for electoral reforms. On Wednesday there will be a town hall meeting at the PSU building, Saturday a drive thru on the West Coast, Sunday a National Day of prayer and on Monday a massive public meeting and candle light vigil in Roseau. We solicit your support as we commit ourselves to nation-building and the restoration of our democracy.

Hospitalised Pelé thanks fans during fight against cancer