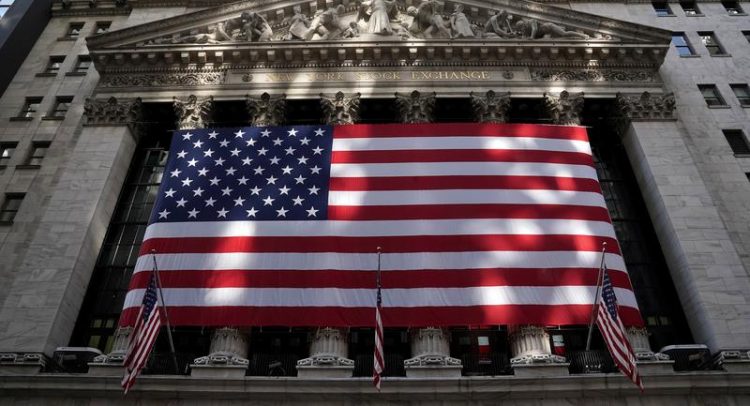 NEW YORK (Reuters) – Stocks brushed against last week’s record high on Monday before trading little changed and an index of commodity prices touched its highest since March as more vaccine-positive news gave investors hope economic activity could resume globally at a faster clip than has been thought.

AstraZeneca said its COVID-19 vaccine, cheaper to make, easier to distribute and faster to scale-up than its rivals, could be as much as 90% effective.

“This means we have a vaccine for the world,” said Andrew Pollard, director of the Oxford University vaccine group that developed the drug.

Currencies in the emerging markets reacted positively to the news, as it allays concerns over the distribution logistics of a vaccine for developing countries.

The Mexican peso, for example, strengthened to under 20 per dollar for the first time since March. The US dollar index touched its lowest since Sept. 1 before edging higher, mostly at the expense of the euro.

Emerging market stocks rose 0.82% while MSCI’s gauge of stocks across the globe gained 0.25%.

On Wall Street indexes were mixed with the Nasdaq posting small losses and the Dow industrials up over half a percent.

Markets’ optimism also came after a top official of the U.S. government’s vaccine-development effort said Sunday that the first vaccines there could be given to U.S. healthcare workers and some others by mid-December.

“The market has moved higher with confidence that as we get better at treating and preventing this virus, economic activity will likely follow in the wake of that,” said Art Hogan, chief market strategist at National Securities in New York.

“Investors are ignoring near-term headwinds, chief among which are surging global COVID infections, and instead looking ahead to next summer,” said PVM analyst Stephen Brennock.

The United States has surpassed 255,000 deaths and 12 million infections since the pandemic began, with daily infections at a record near 170,000 and daily deaths around 1,500.

An index of commodity prices touched its highest since early March.

Gold fell to its lowest in four months as optimism over vaccine progress drove investors towards riskier assets.

3rd major COVID-19 vaccine shown to be effective and cheaper