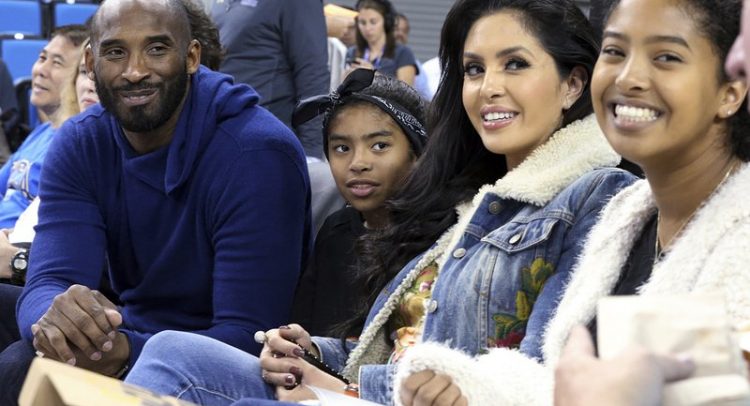 LOS ANGELES (AP) — Vanessa Bryant said she is focused on “finding the light in darkness” in an emotional interview with People magazine detailing her attempts to push forward after her husband Kobe Bryant and daughter Gigi died in a helicopter crash early last year.

Bryant said the late NBA superstar and Gigi continue to “motivate me to keep going” in the magazine’s Women Changing the World issue, which will be released Friday. The issue salutes the activists, innovators and role models who are making a difference.

The 38-year-old widow of the Los Angeles Lakers legend expressed how she’s been trying to navigate heartache while trying to rebuild a life for herself and three daughters.

“Lying in bed crying isn’t going to change the fact that my family will never be the same again,” she said. “But getting out of bed and pushing forward is going to make the day better for my girls and for me. So that’s what I do.”

Kobe Bryant was killed when the helicopter carrying him, his 13-year-old daughter and seven others crashed into a mountainside in Calabasas, California, while flying to a girls basketball tournament at his Mamba Sports Academy on Jan. 26, 2020.

Vanessa Bryant said her devotion to her daughters Natalia, Bianka and Capri have been a saving grace.

“My girls help me smile through the pain,” she said. “They give me strength.”

On the magazine cover, Vanessa Bryant sports a Lakers jacket with Kobe’s No. 24 on the right sleeve.

Vanessa Bryant said she wants to honor her husband and daughter’s legacy by creating opportunities for young female athletes.

Bryant felt compelled to follow through on the vision her husband long championed.

FILE – In this Nov. 21, 2017, file photo, from left, Los Angeles Lakers legend Kobe Bryant, his daughter Gianna Maria-Onore Bryant, wife Vanessa and daughter Natalia Diamante Bryant are seen before an NCAA college women’s basketball game between Connecticut and UCLA, in Los Angeles. Vanessa Bryant says she is focused on “finding the light in darkness” in an emotional story in People magazine. She details how she attempts to push forward after her husband, Kobe Bryant, and daughter Gigi died in a helicopter crash in early 2020. (AP Photo/Reed Saxon, File)