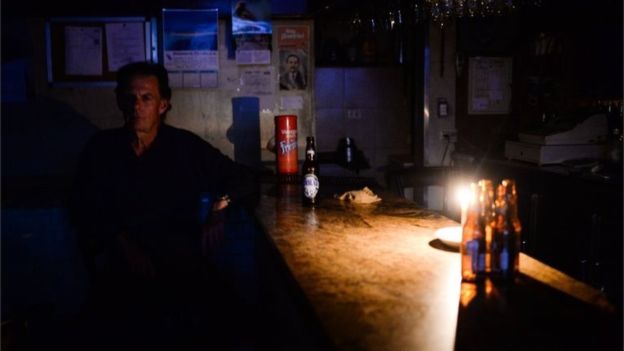 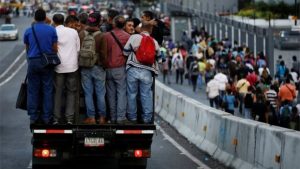 A power cut during the evening rush hour in Venezuela’s capital, Caracas, caused major disruption to parts of the city on Tuesday.

Hundreds of commuters could be seen walking along the city’s central avenues as the metro was affected.

Other caught lifts on lorries or hung on to the doors of overcrowded buses.

Parts of the states of Miranda and Vargas were also hit by the cut, which officials blamed on “sabotage” without saying who may be behind it.

Some of those affected reported on social media that buses and taxis raised their fares as demand soared.

With many cash machines without power, people could not withdraw money to pay for transport and were forced to walk.

Venezuela’s inflation rate, the highest in the world, means that high denomination notes are hard to come by and stacks of them are needed to pay even modest amounts.

He said the cables of a transformer had been cut, causing an explosion and a fire at a substation in Miranda state.

Electricity returned to some parts of Caracas later on Tuesday evening.

Venezuela experienced serious power shortages in 2016, when a drought left one of the main hydroelectric power stations almost dry.

The situation has improved since, but power cuts do continue to occur.

The government regularly blames the problems on “saboteurs” but critics of the administration of Nicolás Maduro say that officials have failed to maintain the country’s facilities and infrastructure.

Police investigating stabbing of man while in bed