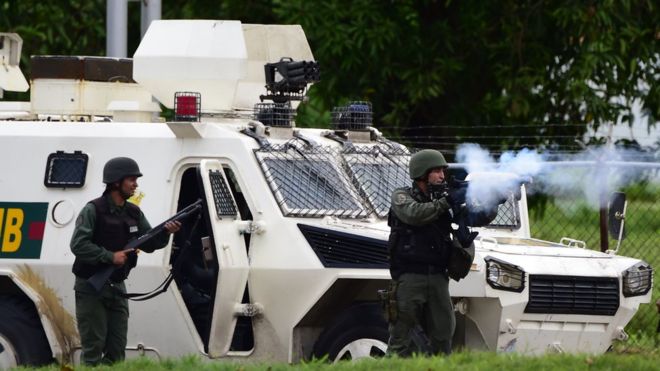 Venezuelan security forces have carried out hundreds of arbitrary killings under the guise of fighting crime, the UN says in a new report.

Venezuela has in the past dismissed human rights allegations as “lies”.

The country is going through a protracted political and economic crisis.

Scores of protesters were killed in clashes during anti-government protests last year and the country is also experiencing hyperinflation and food shortages.

President Nicolas Maduro was re-elected in May after the opposition boycotted the vote.

The UN says the alleged extra-judicial killings were carried out by officers involved with the Operations for the Liberation of the People, ostensibly a crime reduction initiative.

These officers may have killed more than 500 people between July 2015 and March 2017 as a way to showcase crime reduction results, the UN says. They are alleged to have staged evidence to make it look like the victims died in an exchange of fire.

The officers involved have immunity from prosecution and no one has been held accountable.Mr Hussein has called for an international investigation and has suggested the International Criminal Court could also become involved.

UN investigators have been denied access to Venezuela – a current member of the UN Human Rights Council – and made their findings from interviews with witnesses and victims.

Some of the other evidence comes from former attorney general Luisa Ortega. She was fired by Mr Maduro last year and went into exile.

Earlier this week the US quit the UN Human Rights Council, having previously criticised the body for failing to act against Venezuela.

Mr Hussein has also accused Venezuela of failing to acknowledge the depth of its crisis, which has seen hundreds of thousands of people flee abroad.

“When a box of hypertension pills costs more than the monthly minimum wage and baby milk formula more than two months’ salary, but protesting against such an impossible situation can land you in jail, the extreme injustice of it all is stark,” he added.

“We dying, it stinks, I can’t sleep” – Dennery and Micoud residents frustrated with seaweed problem