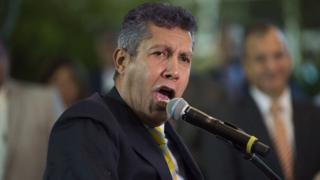 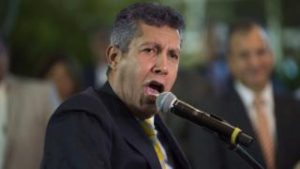 Venezuela’s opposition has expelled a former state governor after he said he would stand against President Nicolás Maduro in April’s election.

The Democratic Unity opposition coalition is boycotting the vote.

It said Henri Falcón was wrong to validate what it called a fraudulent electoral system.

Mr Falcón defended his decision, saying he wanted to defeat a government that had “promised Venezuelans paradise, but given them hell”.

Henri Falcón was a close ally of the late President Hugo Chavez but later joined the opposition.

“We repudiate the unilateral registration of Henri Falcón,” Democratic Unity said on Twitter, referring to the election as a “farce”.

Mr Falcón, who was governor of Lara state from 2008 until last year, said he wanted to stand “on behalf of millions of Venezuelans who want to live in dignity”.

He said he offered “a government of national unity… that can save us from the misery to which this incompetent government has taken us”.

Venezuela is going through a protracted political and economic crisis.

It has suffered for years from high inflation and a chronic shortage of food and medicines.

President Maduro has said elections would be held “with or without” the Democratic Unity opposition coalition, which he accused of “erratic conduct”.