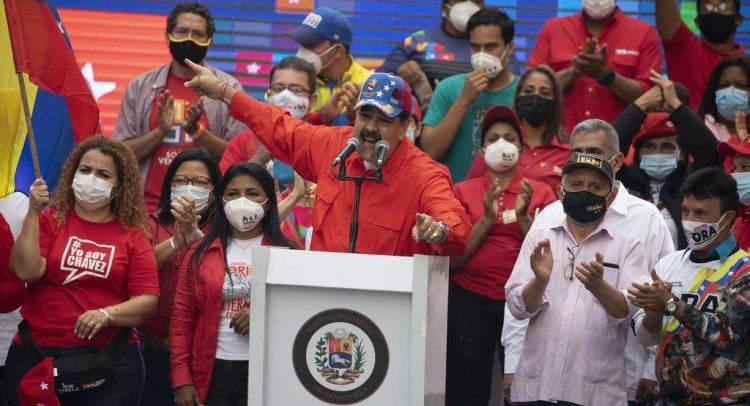 Venezuela’s Maduro seeks to tighten his grip via election

CARACAS, Venezuela (AP) — With the political opponents of President Nicolás Maduro boycotting Sunday’s election for the National Assembly, his socialist party is expected to dominate the vote, giving him control of the last major institution in Venezuela outside his grasp.

The opposition contends the election is rigged and has called its own referendum to counter it. Both votes are playing out in the waning days of the Trump administration, which leaves office with Maduro firmly entrenched despite its efforts to bring about his departure through diplomacy and sanctions.

By taking over the National Assembly, some experts say Maduro’s United Socialist Party of Venezuela will effectively smother the last remnants of democracy in the country.

“Everything indicates that he will achieve what he has always sought, which is to have total, authoritarian, hegemonic control of all the country’s institutions,” said Michael Shifter, president of the Washington-based Inter-American Dialogue.

He expects US President-elect Joe Biden, who has not hesitated in calling Maduro a “dictator,” to maintain a tough position against the South American leader, and even refine the strategy further, such as taking steps to work more closely with European allies.

Once an oil-producing powerhouse, Venezuela has been embroiled for years in a deepening political and economic crisis. More than 5 million people have fled the country in recent years, the world’s largest migration after war-torn Syria. The International Monetary Fund projects a 25% decline this year in Venezuela’s GDP, while hyperinflation diminishes the value of its currency, the bolivar.

Maduro, the hand-picked successor to the late President Hugo Chávez, won a second term in 2018. But Washington and several nations accused him of fixing the outcome by banning his most popular opponents from challenging him.

The Trump administration took the lead by hitting Maduro with punishing sanctions, targeting the state-run oil firm PDVSA and cutting him off from billions of dollars annually. The US Justice Department also indicted Maduro as a “narcoterrorist,” offering a US$15 million reward for his arrest.

But he remains in power with backing from Venezuela’s military and international support from nations like Iran, Russia, China and Cuba. Maduro’s domestic allies also control the supreme court, prosecutor’s office and elections commission.

Maduro has campaigned for his party’s congressional candidates — including his son and wife — promising to finally silence the right-wing opposition, which he accuses of inciting violent protests.

Ahead of the election, state TV has broadcast video of large campaign rallies with cheering crowds led by Maduro and his political allies, despite polls showing he is widely unpopular.

“We’ve had to suffer under five years of horror, plots, conspiracies and failure,” Maduro said. “Our people are aware that it was a mistake to elect the opposition.”

International bodies like the European Union have refused to send observers to Sunday’s election, saying the conditions for a democratic process don’t exist.

Guaidó’s once-high approval has fallen since early last year as Venezuelans grow frustrated that the opposition hasn’t been able to topple Maduro and restore stability.

The referendum is being held over several days immediately following the congressional election. Venezuelans can register their votes digitally and in person in cities across Venezuela and abroad. Civil organizations are organizing it without any independent audit or observation.

Guaidó is banned from television and radio broadcasts in Venezuela. Instead, he has appeared in public by talking with people waiting in long lines to buy gas, or speaking to representatives of a teachers’ union. He urged them to take part in the referendum.

Despite the boycott by the Guaidó-led coalition, a small number of opposition parties not associated with him have had dialogue with the government and are participating in the election. Critics say this will allow Maduro to maintain the semblance of a valid contest.

Carlos Vecchio, Guaidó’s ambassador to Washington, said opposition leaders realize the risk of carrying out the referendum as once-fervent support fades and they face potential aggression from Maduro’s armed forces and roving groups of his supporters on motorcycles.

“I can understand that frustration, but we have no alternative. We have to keep fighting for a transition,” Vecchio said. “I feel frustration as well.”

He cited the lack of access to Venezuelan media and the Maduro government’s decision earlier this year to strip the main opposition parties of their leaders and replace them with its own representatives.

Vecchio wouldn’t say whether his delegation in Washington has made contact with Biden’s incoming administration, saying they remain focused on keeping up support from both Republicans and Democrats.

Elliott Abrams, the US special representative to Venezuela, said the US will continue to recognize the opposition lawmakers in the current National Assembly and Guaidó’s role as interim president, despite Sunday’s outcome. Without being re-elected, their term ends in early January.

Abrams said he also expects broad international support for Venezuela’s opposition to remain firm, even as Maduro’s government tries to push them out of Venezuela’s political landscape.

“They’ve done everything they can to make sure this is not a free election,” Abrams said. “We’re getting instead an election that doesn’t deserve to be called an election.”

What does emergency use of a COVID-19 vaccine mean?