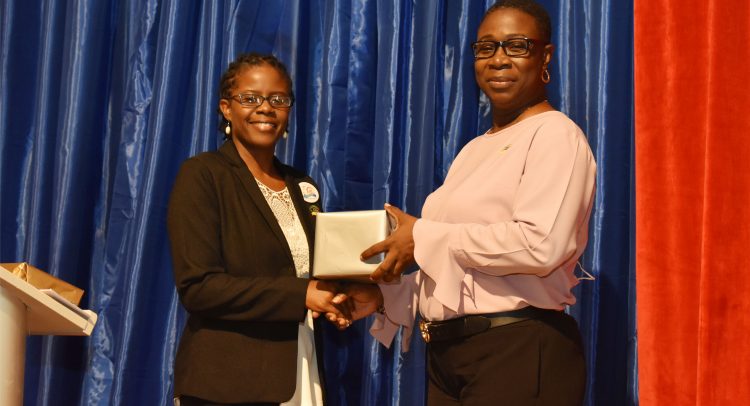 CHARLESTOWN, NEVIS, June 7, 2022 (MMS-SKN) — Mrs Vernesia Walters who served as President of the Nevis Co-operative Credit Union (NCCU) Limited and led the financial institution during its most challenging times, occasioned by the COVID-19 pandemic, is set to retire having served two three-year terms as a member of the Board.

At the 49th Annual General Meeting of the NCCU held on Thursday June 2, at the Nevis Perfuming Arts Centre (NEPAC), Pinney’s Industrial Site in St. Thomas Parish, Chairman of NCCU’s Nominating Committee, Mr Dwight Morton, told the general membership that the President had served two consecutive three-year terms, which meant that she could no longer vie for a position.

He advised that the Nominating Committee had determined that Mrs Kenisha David should be the person to be nominated, and recommended that she replace Mrs Vernesia Walters.

The Credit Union, which is the oldest in the Federation of St. Kitts and Nevis, was registered on July 25, 1972. It is observing year-long 50th anniversary celebrations under the theme ‘Consistency, Financial Security & Serving the Community – 50 years of Development and Prosperity’, which kicked off at the beginning of the year.

Mrs Walters first presided at the 46th Annual General Meeting of the Nevis Co-operative Credit Union Limited that was held on Thursday September 12, 2019 at the Occasions Entertainment Centre, Pinney’s Industrial Site, St. Thomas Parish, while she served in the third year of her first term on the Board of Directors.

“The Nevis Co-operative Credit Union recognises that our survival in the financial space that we occupy is largely dependent upon our creativity and use of technology to retain our current members and attract new ones,” she told the membership as she presented the 2018 Annual Report in a message that would turn out to be prophetic.

The coronavirus pandemic hit the world in 2020 and St. Kitts and Nevis like all the other countries in the world was negatively affected with many people losing their livelihoods. The Credit Union was not spared as its 47th Annual General Meeting was on Wednesday September 23, 2020 held in a hybrid format with ‘In-Persons’ participation by persons at the Nevis Performing Arts Centre, and ‘Virtually’ via the Zoom Video Conferencing platform.

“Most recently, we have been challenged with maintaining our operations in the midst of the COVID-19 pandemic, and because we understand your need to access funding to support yourselves and your families, and to keep your businesses operational, we rose to the challenge and put systems in place that minimised the disruption of our services,” Mrs Walters advised.

Coming out of what she had informed the membership when she first presided at the AGM in 2019, she confirmed that the Credit Union had ensured that its ATM and online banking services remained functional. It launched a new loan product dubbed ‘Learn On The Go’ which was designed to make funding for computers and accessories accessible for parents and guardians whose children were required to continue their education online, and for teachers who were required to host online classes.

“We approved moratoriums and other financial relief initiatives for members whose incomes were and are still being affected by the pandemic,” said President Walters. “All in all, we have ensured that we maintain a safe, secure and healthy environment by adhering to the protocols established under the Emergency Powers (COVID-19) Regulations as enforced by the COVID-19 Taskforce.”

When she presided over the 48th Annual General Meeting held on Wednesday October 20, 2021 while presenting the Annual Report for the year ended December 31, 2020 to the members, she noted that though faced with the most challenging period in its recent history as a result of the outbreak of the COVID-19 pandemic, the credit union reported a successful year of operation which resulted in a record operating income of $2.7 million.

At the 49th Annual General Meeting, which would be her last as the President, it was announced that even as Covid-19 continued to negatively impact the economy of St. Kitts and Nevis, the credit union had recorded a modest financial performance in 2021, with positive growth occurring in all key areas, returning a net operating surplus of $1,672,046.

“I wish to take this time to say ‘thank you’ to the Board of Directors, the committee members and all members, management and staff for your support over the past six years of being a director on the board, and the past three years of being President of the Nevis Co-operative Credit Union,” said Mrs Walters, after it was announced that she was to retire.

She added: “It indeed has been a pleasure working with the credit union. It is a bittersweet moment for me because I will miss my hardworking team – I just love working with these people. I will miss management and staff, but I would continue to be a member of the credit union, so I will be around and I am currently sitting on the St. Kitts and Nevis Co-operative League, so I will still continue to work closely with the Nevis Co-operative Credit Union Limited at least for some time. Thank you for your support and I wish the credit union well and much success in the future.”