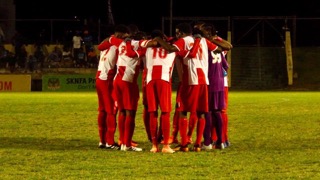 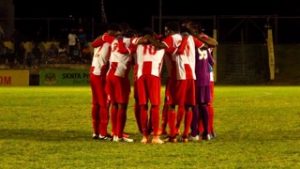 Rams Village Superstars drew first blood in the National Bank Premier League Final Four playoffs after they blanked S.L. Horsfords St. Pauls 2-0 at the Warner Park Saturday night. Tahir Hanley was the two goal hero for the league leaders after he scored a scorcher early in the first half in the 9th minute of play and again in the 73rd minute.

Winning Coach Jeffrey Hazel is already looking forward to the next game. “They came out in the second half with the momentum,” he said of his team. “With discipline we’re victorious. Congrats to them for really staying focused and to the task. We look forward to the next game. We have to go back to the drawing board, work on a few things and get ready for next Wednesday,” Coach Hazel said.

Meanwhile, in the earlier match, back to back defending champions Flow 4G Cayon Rockets drew 0-0 with SOL Island Auto Supplies Conaree F.C. in the first of the double header. Coach George “Yellowman” Isaac seemed satisfied with his team’s performance despite the draw. “The game was a positive game. It was a good game in the first half. We had both teams going on the attack and on the defense but I tried to allow my guys to press a little more going forward and try to keep the ball in the attacking third,” Coach Isaac said.

However Conaree’s assistant coach DeWayne Delaney believes his team did not impose their will on the match. “Basically it was a keenly contested match. Both teams want the “W” but unfortunately we have to share the spoils. We were a bit apprehensive in the first half in terms of allowing the play to come to us instead of being proactive and moving forward. We did a little better job in the second half but that is something we have to work on in terms of moving forward in the competition,” Coach Delaney said.

The final four continue this Wednesday with matches beginning at 6pm. Flow 4G Cayon Rockets will take on S.L. Horsfords St. Pauls and the second of the double header Rams Village Superstars play SOL IAS Conaree at 8:30pm. Live audio commentary was provided by Voice of the Caribbean Radio at www.voiceofthecaribbean.net in partnership with the SKNFA. The live commentary was also available via the SKNFA’s website www.sknfa.com. Viewers can also watch live pay per view coverage at www.pep-tv.com.