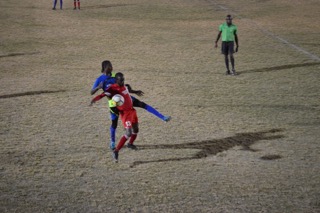 Village trounce Eagles as they stay atop the league 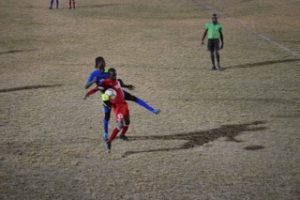 Rams Village Superstars have taken charge of the SKNFA National Bank Premier league ahead of the Easter Cup with a resounding 7-0 win against bottom of the table TGE Dieppe Bay Eagles on Sunday at the Warner Park.

Below are other results in Sunday’s Premier League match:

Round three of the SKNFA National Bank Premier League got underway Saturday night at the Warner Park football stadium with wins for S.L. Horsfords St. Pauls and Winners Circle Newtown United. Newtown made sure they were not going to lose or draw to a lower ranked team, after edging Fast Cash Saddlers United 1-0 courtesy of a 4th minute goal from Tamiel Osborne resulting from a corner kick. He nodded the ball in the back of the night with a sublime header. Coach Anthony Isaac said they did not want a repeat of a match earlier in the week when they drew 1-1 with bottom of the table TGE Dieppe Bay Eagles. “We did mostly a lot more defensive (work)….we were settling for the win to be honest,  but like I said, discipline in the back, that’s what we trained from the past game leading up to this game,” Coach Isaac said.

Donville Eddy, a player with Saddlers United said his team has to work harder if they are to get positive results. “I guess weren’t pressing enough in terms of working as a team….the second half we were trying to build on the unity, work hard and try our best but the better team won,” Eddy said

In the second match of the night S.L. Horfords St. Pauls edged Hobson Enterprises Garden Hotspurs 2-1. Spurs took the lead in the 17th minute from Sylvester Caines, but Keithroy Freeman equalized two minutes later to make it 1-1 at halftime. The match almost ended before Freeman scored the winning goal in the 89th minute.

The places for the Easter Cup have already been decided from the end of round two last week. The teams that will be contesting this year’s Easter Cup will be Rams Village Superstars, Hobson Enterprises Garden Hotspurs, S.L. Horsfords St. Pauls United and SOL Island Auto Supplies Conaree F.C.