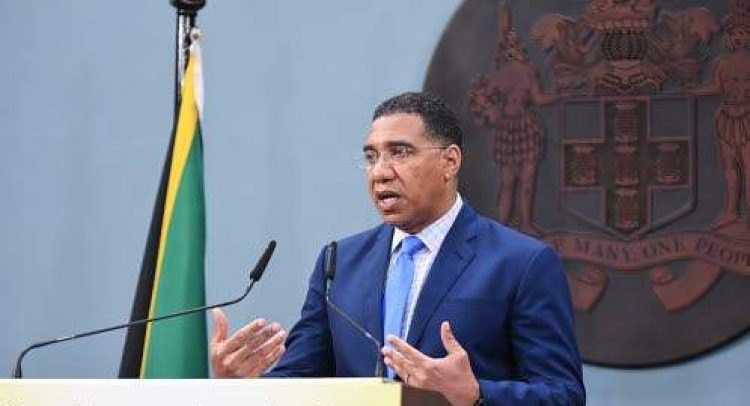 As of July 1, some visitors from the United States who plan to enter the island on and after July 10 will have to be pretested for COVID-19 for their applications for landing to be considered.

Prime Minister Andrew Holness made the announcement at a virtual press conference from Jamaica House yesterday evening as the Government continues to reconfigure protocols for entry and re-entry to the island in its push to fully reopen the country in spite of the pandemic.

The pre-requisite for entry applies to individuals coming from COVID-19 hot spots, including Florida, New York, Arizona, and Texas.

Holness said the Government had not moved to impose the requirement for all US visitors due to issues with widespread availability of the polymerise chain reaction (PCR) test, among other considerations.

Visitors must upload their test results to the Visit Jamaica portal.

The prime minister said, while approval for entry is subject to pretesting, negative results do not mean automatic approval as permission to enter is still risk-based.

“Persons registering to visit Jamaica coming from these area, as of July 1, will be required to upload a valid PCR test [result], which must [not have] been more than seven days old from the expected date of their arrival… As of July 10, persons visiting Jamaica [non-residents] from the declared high-risk areas will be required to present their PCR test,” he stated.

At the same time, Holness urged individuals to reconsider travelling at this time if they have been confirmed with COVID-19.

Meanwhile, Prime Minister Holness said that after a month of the controlled re-entry programme, the projected 2.5 per cent positive rate or 851 cases of COVID-19 has instead seen an outturn of 0.7 per cent, or 82 positive cases since June 1. He said the island would have, at this point, seen a flattening of the outbreak of the novel coronavirus outside of the controlled re-entry programme, but stressed that barring Jamaicans from coming home is not an option.

“It s unthinkable that we should do anything to prevent their return home and what you’re seeing here is a build-up of Jamaicans who wanted to come home, and now they are exercising their right so to do through the protocols which we have established,” he stated.

Reports are that, on average, this month 22 flights are expected into the island daily, bringing a total of 1,680 passengers, marking a significant increase over the five flights and 410 individuals per day who have been coming in. Thirty-one thousand applications have been processed for Jamaicans and visitors who wish to come to the island, which includes 23,000 residents and 8,000 non-residents, while approximately 14,600 people have arrived in the island since the controlled re-entry began — including 9,300 residents and 5,300 non-residents. An additional 15,000 people have been approved for travel here, 2,600 of whom are tourists.

The prime minister stressed that the increasing number of arrivals would stretch the public health resources and that the Government is still tallying the tab for the measures that have so far been put in place.

“You can imagine the resource constraints that we would face to keep the same levels of controlled re-entry that we have kept through the month of June. We did that very high-level control protocol so that we could establish, using very stringent criteria, what is the risk that the population faces from the re-entry programme,” Holness emphasised, adding, “We now know what the risk is… What it means is that we can reconfigure the limited resources that we have.”

He said with the health ministry now having the benefit of testing for entry for over a month, protocols can be reconfigured to allow for more efficient use of limited resources for testing and surveillance at ports and within the island.

EU to allow in visitors from 14 'safe' countries