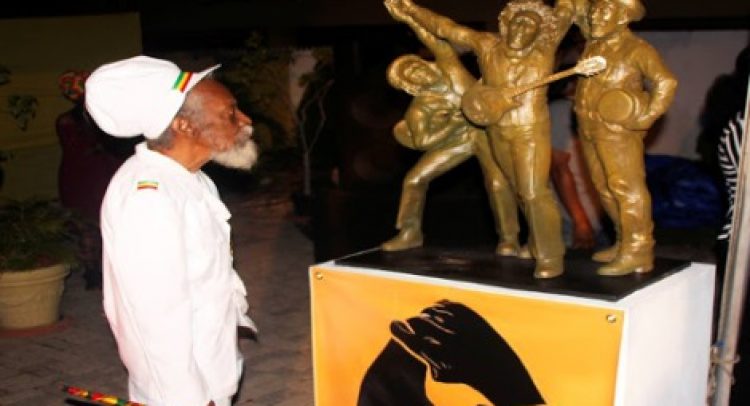 With the conversation about the removal of colonial imperial statues coming to life, the Bunny Wailer Foundation feels that now is a good time to insert the Wailers statue project into this narrative, albeit in a positive way. ‘The Wailers Monument’, as Bunny Wailer refers to it, is the creative, larger-than-life sculpture in recognition of the life and work of the trio – Robert Marley, Winston McIntosh, and Neville Livingston – who continued their work as three Jamaican international Rastafari reggae superstars.

The monument, which was commissioned by the Bunny Wailer Foundation and is being built by sculptor Paul Napier, will be cast in bronze and is estimated to stand over nine feet in height. It comes with a price tag of approximately J$103 million. “It is currently being funded as a collaboration between the Wailers Ltd and the sculptor. We are both bringing our resources to bear to make it happen,” Bunny Wailer’s manager, Maxine Stowe, told The Sunday Gleaner. However, there are long-term plans for a public-private partnership, as well as the establishment of a GoFundMe initiative.

“That campaign will be launched for music and culture fans to support the fundraising initiative, which will include The Wailers Trio EP, a documentary of the genesis and construction of the project, and also a limited, miniature edition of the monument. These limited editions will be cast in bronze and will carry a certificate of authenticity signed by Bunny Wailer and sculptor Paul Alphanso Napier,” Stowe, who has been focused on music culture museum spaces for the related intellectual property rights, said. She added, “With all the non-support and now discussing about removing certain statues, the repression of this one rises like a Phoenix from the ashes.”

The statue forms part of Bunny Wailer’s legacy strategy, incorporating years of continuing agitation for the group’s identity and intellectual property as a founding member. Stowe noted, “Jah B has met with strong resistance in his pursuit of his objectives from their individual and collective interests. The Peter Tosh Estate, however, has been supportive throughout.”

A maquette depicting the three artistes holding hands as a symbolic gesture of unity was unveiled to the public in December 2018. The sculptor, Napier, pointed out, however, that owing to the height differences among the three Wailers, there was difficulty in trying to maintain close proximity of the figures while they held hands. “This resulted in one of the figures, Peter Tosh, placed in a crouched position. Unfortunately, the pose was interpreted as a pose of subordination, so a new, upright standing sketch was submitted, and the matter was resolved,” he said. Peter Tosh, the tallest of the three, stood at six feet, five inches.

Stowe pointed out that the project also sits within the Wailers Catch A Fire 50 Campaign follow-up to the release this year of Soul Rebels 50. “The Wailers Trio Tribute Group (Asadenaki, Blvk Hero and Written) was also launched to support the initiative, and an album, titled Soul Rebels 50, is set to be released to kick off the fundraising campaign. It is slated for release on July 23,” she said.

For Bunny Wailer, however, this is a difficult period – a ‘Wailing’ space, as Stowe calls it, in direct reference to the continued search for his wife, Jean Watt, who disappeared from home on May 23; the COVID-19 pandemic and lockdown; and the Black Lives Matter (BLM) movement.

“We continue our relentless search for Sis Jean. The reward has been increased to $1 million, and we have put a private investigator on the case,” Stowe shared. With regard to the BLM movement, she stated, “Music captures the spirit and time in which they are written. Future generations can look towards music to understand events of the past and instructions for the future. The civil-rights movements of the 1960s and ’70s, and now the Black Lives Matter of 2020, echo sentiments and strategies of overcoming poverty, oppression, and racial injustice against people of African descent. The currency of the 2020 Black Lives Matter experience is captured in the lyrical wordings of The Wailers’ internationally trendsetting albums Catch A Fire and Burnin’,” she said.

Stowe outlined the connectivity of the music, the monument, and BLM. “In honour of this relationship and the role of the African American music of the South’s early impact on Jamaica to develop our indigenous music industry that returned to inspire the development of the urban African American hip-hop genre and other diaspora continuities, the Bunny Wailer Foundation is pursuing ‘The Wailers Monument’ as a cross-cultural music experiential space,” she said.