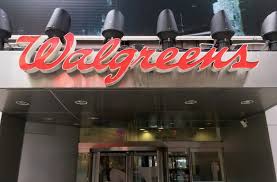 Walgreens Boots Alliance Inc’s (WBA.O) quarterly profit beat estimates on Thursday as the drugstore chain benefited from its acquisition of rival Rite Aid Corp’s (RAD.N) stores, and the company said it would buy back shares worth up to $10 billion.

In its first earnings report after joining the benchmark Dow Jones index, the company said overall sales at its pharmacies rose 19.3 percent in the third quarter due to higher prescription volumes at Rite Aid stores.

Walgreens scrapped its deal to buy Rite Aid outright last year after failing to win antitrust approval, and instead bought some of its U.S. stores.

Walgreens, which replaced General Electric Co (GE.N) on the Dow on Tuesday, said same-store sales at its U.S. pharmacies were unchanged in the quarter. The average expectation was for a 3.7 percent rise, according to eight analysts polled by Thomson Reuters I/B/E/S.

Shares of Deerfield, Illinois-based Walgreens were marginally down at $66 in premarket trading.

Walgreens’ retail segment continued to be a drag on the drugstore chain’s results, with same-store sales in the business falling 3.8 percent.

The company, along with other drugstore chains, is seeing a drop in customer visits to retail stores, where it sells over-the-counter drugs and cosmetics, as purchases have now shifted online.

“In what has become the norm for Walgreens’ print, there are a ton of moving parts,” Evercore analyst Ross Muken said in a client note, adding that the U.S. business missed estimates as Walgreens lost market share in the Medicare Part D space.

The company’s total sales rose 14 percent to $34.33 billion, edging past the average analyst estimate of $34.05 billion.

Walgreens also said it had increased its quarterly dividend by 10 percent to 44 cents per share.