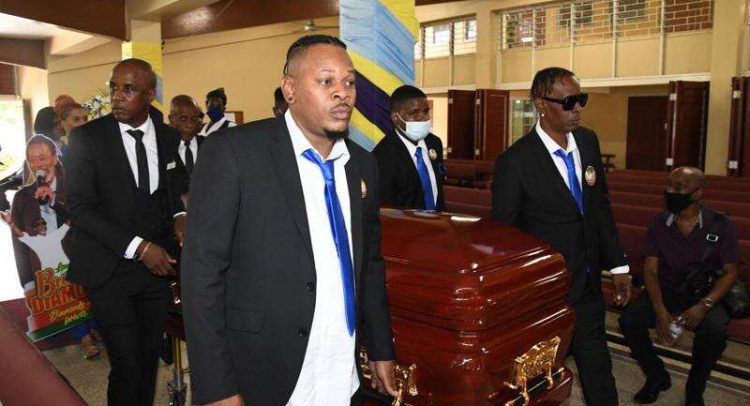 The man and the music of Fitzroy “Bunny Diamond” Simpson, one-third of the reggae trio — The Mighty Diamonds, were celebrated at his funeral service held at the Boulevard Baptist Church in St Andrew on Thursday.

The 70-year-old, who died on April 1, days after fellow bandmate Donald “Tabby Diamond” Shaw was gunned down in St Andrew, was remembered by a wide cross section of Jamaican society, including members of the entertainment fraternity and members of his own family for his humour, humanity, humility and professionalism.

Ronece Simpson started her tribute with a medley of The Mighty Diamonds hits, including Right Time, Have Mercy, and Africa, before sharing a personal account of her life as a daughter with those gathered in the sanctuary as well as persons who joined via the livestream on the Internet.

She noted that he was the most supportive father his six children could ask for.

“He was always encouraging us to chase our dreams and always telling us the same stories over and over. Daddy taught his children very valuable life lessons. He taught us to save, to be independent and most importantly, to be humble. One of the things I loved about daddy and all my siblings can attest is that he never held a grudge… really an admirable quality. For the past three years, he was very disgruntled when he had to take a break from entertaining because he really loved his fans and entertaining them. He spent his last years listening to the radio a lot. On April 1 when he took his last breath, he left a legacy that will remain with us always and forever,” said Simpson

The music of The Mighty Diamonds also formed the backdrop to the sermon delivered by the Reverend Dylan Toussaint.

For his opening salvo, Rev Toussaint drew on the line from Right Time — “When the parson come, him a guh quote the scripture”. “Well, I am a parson and the right time has come to quote the scripture,” he noted. The scripture, which spoke to God-given talents, was likened to the talents of The Mighty Diamonds.

He went on to share four tenets — excellence, balance, resilience, and vigilance — which he believed are important to be good stewards of what God has entrusted to us.

“In my final preparation to be here this morning, I went to Google and YouTube and I enjoyed some Mighty Diamonds music again. One of the thing that stands out is the professionalism that they brought and kept to the music that they sang. The sense of excellence. You get the impression that these men not only sang, but they sang to the best of their abilities. When they sought to blend in harmony they rehearsed until they got it right before it was put on record,” he said.

On the subject of balance, Rev Toussaint called for a variety in the subject matter of the music being released by artistes at this time.

He also used the opportunity to charge the entertainment fraternity to be vigilant and protect the music and culture from external forces.

His final tenet, resilience, had to do with staying the course and being dedicated to the true purpose of the music.

“We must continue to produce wonderful, beautiful songs. But always remember they must ultimately be to the glory of God. If the songs are only glorifying the ills of society, we have missed the boat. Thank God for the wonderful music of The Mighty Diamonds, but we must remember that God is to receive all the glory and all the praise.,” he declared.

The Mighty Diamonds was formed in 1969 by the trio who all grew up in the famed Trench Town. For just over 50 years, they have toured the world with a rich catalogue of reggae music. All three members were awarded the national honour, Order of Distinction, for their contribution to the growth and development of the music in October 2021.