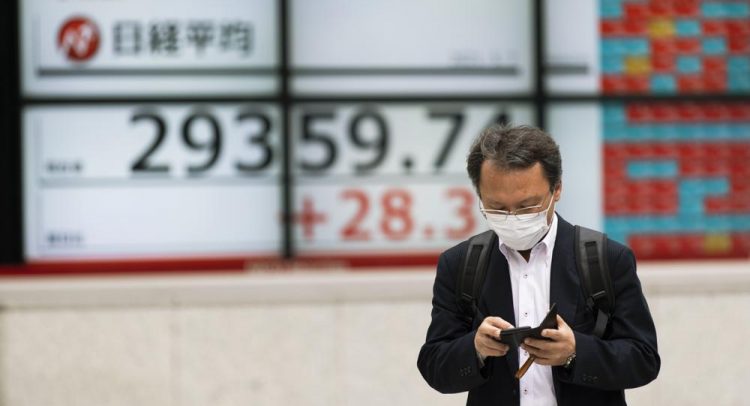 NEW YORK (AP) — Stocks are rallying toward records on Wall Street Friday despite a grim report that showed hiring fell off sharply across the country last month.

Voices up and down Wall Street acknowledged that Friday morning’s jobs report was a massive disappointment. It’s usually the market’s most anticipated economic data of each month, and it showed employers added just 266,000 jobs in April. That was far less than the 975,000 jobs that economists expected and a steep slowdown from March’s hiring pace of 770,000.

The weak report jolted the bond market and sent yields tumbling. The yield on the 10-year Treasury briefly dropped below 1.49%, to its lowest level in two months before recovering, down from 1.56% late Thursday.

But even with April’s sharp slowdown in hiring, many analysts said they nevertheless expect the economy to continue to strengthen as coronavirus vaccinations keep rolling out. The weak numbers also bolster the case for the Federal Reserve to continue its policies to keep interest rates low in hopes of helping the jobs market heal.

Low rates have been a huge reason for the stock market’s surge to records from its pandemic low in March 2020. One of the market’s biggest fears in recent months has been that a supercharged economy could lead to higher, lasting inflation that would force the Federal Reserve to pull back on its measures.

Stocks that have benefited most from low rates, including high-growth tech companies, helped lead the market on Friday. Microsoft rose 1.2%, and Adobe rose 2.4% as the tech sector alone accounted for nearly half of the S&P 500′s morning gain.

Strong earnings reports also helped to boost the market, as companies continue to turn in blockbuster results for the first three months of the year. Expedia rose 7.6% for the biggest gain in the S&P 500 after reporting a loss for the first quarter that wasn’t as bad as Wall Street expected, and it had better revenue than forecast.

On the losing side, though, were banks and other companies hurt by the drop in Treasury yields. Zions Bancorp. slipped 1.5%, and First Republic Bank lost 1.4%, as financial stocks in the S&P 500 dipped 0.3%. It was the only one of the 11 sectors that make up the index to fall.

The yield in the 10-year Treasury recovered a bit after its initial tumble following the release of the jobs report, and it was at 1.53% in morning trading.

The lower-than-expected hiring figures seemed to calm some of the inflation fears that have overhung markets for weeks, although the report also showed that average wages rose more than expected.

China reported its trade with the United States and the rest of the world surged by double digits in April as consumer demand recovered, but growth appeared to be slowing.

Japan has decided to extend its state of emergency to curb the spread of COVID-19 infections, which kicked in last month in some urban areas, with people asked to stay home and restaurants to close early. The emergency will continue through the end of the month, instead of ending May 11, officials said.

Worries are growing that Japan’s medical system is being stretched thin, straining its ability to roll out vaccinations and treat rising numbers of infections. About 2% of the 126 million people in Japan have been inoculated so far. Opposition is growing against the Tokyo Olympics, set to open in July, with doubts growing whether the government can make good on its promise to have the elderly vaccinated by then.

A man walks by monitors showing Japan’s Nikkei 225 index at a securities firm in Tokyo on Friday, May 7, 2021. Asian shares rose Friday on optimism about the rally on Wall Street and an economic rebound in the U.S., as investors awaited the release of jobs data. (AP Photo/Hiro Komae)